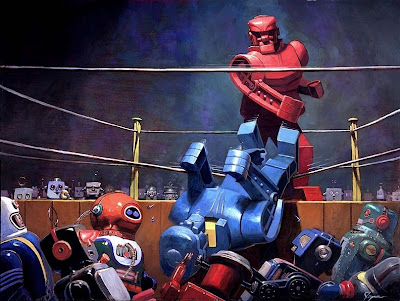 If you thought that ever so busy Hugh Jackman has an endurance of a robot, now you'll see his connection with walking/talking machines in the "Real Steel". Shawn Levy is doing the adaptation of Richard Matheson's short story which depicts a world where human boxers are replaced by robotic ones. Hugh Jackman will play an ex fighter who finds an abandoned boxing robot who somehow seems to always win in every match. Steven Spielberg is the executive producer. The shooting should start before next summer.
Richard Matheson's sf stories have already prooved to be a good material for successful sf films through movies like "I Am Legend" and "What Dreams May Come".
Posted by DEZMOND at 7:40 PM