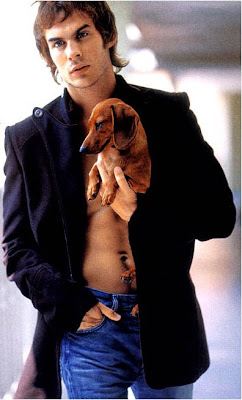 Young TV star Ian Somerhalder ("Lost" and "The Vampire Diaries") has got himself the main role in the romantic gothic fairy tale "Cradlewood" helmed by Harry Weinmann. According to The Hollywood Reporter, the movie centers on an Australian woman (Emma Lung) living in Boston with the heir (Ian Somerhalder) to an incredible fortune whose family history is swirled in a legend that tells of a pact made with a demon which ensures that whenever a boy is born into the family, the father is killed. The heir suspects his girlfriend is pregnant, and after strange events occur, he comes to believe he will die if he continues to fall in love.
Michael Shane, the main producer said: "We see this is as almost like an American-style 'Pan's Labyrinth' in look and feel. It's a perfect story for the kids who have outgrown 'Twilight' but want something romantic and scary. Our monster will be quite terrifying: she is sexually attractive and monstrous at the same time."
Posted by DEZMOND at 6:47 PM