We shall have a TV Monday today with lots of television updates and news, starting with our beloved Rebecca Romijn who has, according to 'The Hollywood Reporter' just joined Rob Lowe in NBC's upcoming new drama pilot THE PRO! The comedy series will be set in and around a tennis and golf club pro shop with Lowe playing Ben Bertrahm, a former doubles champion who is reunited with his ex-partner Bobby Welch (Rob Riggle) after a public feud that left them both floundering in life. Romijn will play Margot, a driven but insecure and lovable 1 percenter who is a board member at the prestigious L.A. Tennis & Golf Club, taking lessons from Ben. She lost her husband in a heli-skiing accident and though she dates, she's never gotten serious about any other man since then. Ben wouldn't mind breaking that streak. Rebecca Romijn is no stranger to TV, you've seen her in UGLY BETTY, PEPPER DENNIS and KING & MAXWELL.

JOINS CW'S 'iZOMBIE' DRAMA
Another of the gorgeous television faces we love to watch, hunky Robert Buckley has joined CW's unusual new show iZOMBIE! According to 'Deadline' it will be a supernatural crime procedural that centres on a med student turned zombie who takes a job in the coroner’s office to gain access to the brains she must reluctantly eat to maintain her humanity, but with each brain she consumes, she inherits the corpse’s memories. Buckley will play Major, Liz’s former fiance who is trying to make the transition to friend. Robert Buckley was brilliant in LIPSTICK JUNGLE, 666 PARK AVENUE and in ONE TREE HILL.
BOJANA NOVAKOVIC IS 'AGATHA' 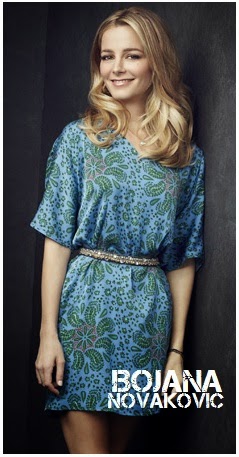 Deadline also reports that ABC drama pilot AGATHA has also found their two lead stars.  In the show, which centres on a former convict and now a big city criminologist who is brought in to help local police crack a case involving a perplexing disappearance, Aaron Ashmore will play Jimmy McAuliffe, a handsome, good-humored and good-natured “meat and potatoes” guy who is a beat cop with the Philly PD and lives in the shadow of his father! Serbian actress Bojana Novakovic will take the lead role of AGATHA after she had starred in RAKE!

'RED BAND SOCIETY' SERIES AT FOX
Meanwhile, one of the actors who starred with the above mentioned Rob Lowe in BROTHERS AND SISTERS series and with Robert Buckley in 666 AVE, David Annable, will now join Oscar winning Octavia Spencer in RED BAND SOCIETY, new Stephen Spielberg produced series at Fox! In the coming-of-age drama, that explores with dark humour the daily lives of a group of teenagers living in a hospital who become unlikely friends, Annable will play Dr. William McAndrew, a rock star paediatric oncologist and surgeon who tries not to get too attached to his young patients.
Posted by DEZMOND at 6:20 PM