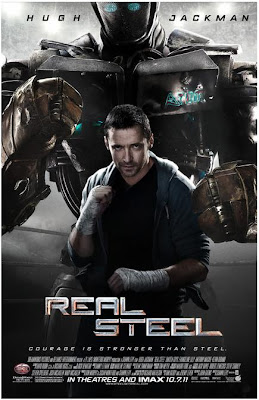 After the rather boring September, October is slowly bringing back big blockbusters into cinemas, and one of them will certainly be Hugh Jackman's REAL STEEL spectacular new sf adventure set in the world of futuristic robot boxing and fighting. The film opens in cinemas October 7th.


REAL STEEL STORY
A gritty, white-knuckle, action ride set in the near-future, where the sport of boxing has gone hi-tech, REAL STEEL stars Hugh Jackman as Charlie Kenton, a washed-up fighter who lost his chance at a title when 2000-pound, 8-foot-tall 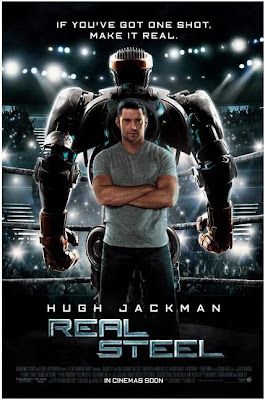 steel robots took over the ring. Now nothing but a small-time promoter, Charlie earns just enough money piecing together low-end bots from scrap metal to get from one underground boxing venue to the next. When Charlie hits rock bottom, he reluctantly teams up with his estranged son Max (Dakota Goyo)to build and train a championship contender. As the stakes in the brutal, no-holds-barred arena are raised, Charlie and Max, against all odds, get one last shot at a comeback. Together they will try to make a champion out of a discarded robot. 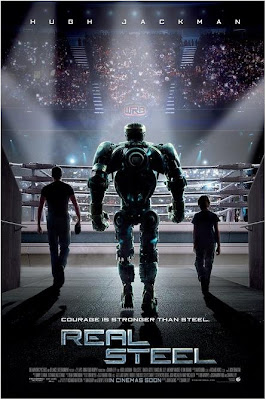 This is sort of a comeback for super charming and ultra talented Hugh Jackman, who didn't really have any films ever since AUSTRALIA in 2008, although he did have smaller roles this summer in BUTTER and in SNOWFLOWER AND THE SECRET FAN. As you know, ahead of him he has roles in WOLVERINE, LES MISERABLES and in THE GREATEST SHOWMAN ON EARTH. Other REAL STEEL cast members include gorgeous Evangeline Lilly (from LOST, who is also playing an Elven girl in THE HOBBIT), action star Kevin Durand (LOST, I AM NUMBER FOUR, LEGION), and rising African 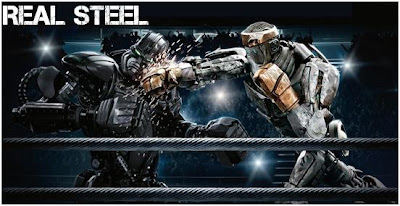 REAL STEEL TIDBITS
The film is directed by Shawn Levy who helmed NIGHT AT THE MUSEUM,  DATE NIGHT and is currently on the verge of getting some big projects in Hollywood. The movie apparently 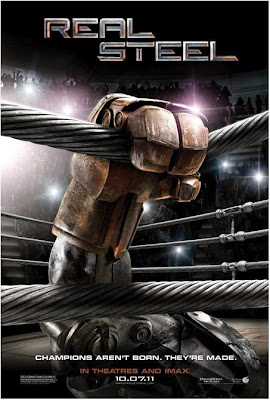 cost somewhere around $80 million. The catchy tagline of the film is - courage is stronger than steel! For young, 12 year old Dakota Goyo, who plays Hugh Jackman's son in the film, this is actually a second huge blockbuster role this year: earlier this spring he played young Thor in THOR. The story on which the film is based, STEEL by Richard Matheson, is actually set in a dystopian world, but the film is set in modern America. DreamWorks has already started work on the sequel to the film. Stunning Olga Fonda will play a Russian owner of one of the champion robots in the film.
Posted by DEZMOND at 12:00 AM