In the whole sea of the upcoming movie or television projects based on Agatha Christie's works (click on her name tag below the post to see them all), surely one of the most intriguing ones will be Kenneth Branagh's MURDER ON THE ORIENT EXPRESS and rumour has it that it might have a rather stellar cast: Judi Dench and Johnny Depp have been cast alongside Michelle Pfeiffer and Daisy Ridley.
MURDER ON THE ORIENT EXPRESS will see travellers stuck in the snowstorm in the middle of old Yugoslavia with a murderer in the train, with Branagh himself playing Hercule Poirot, Depp will be Ratchett, Pfeiffer is Mrs. Hubbard, Daisy Ridley is Mary Debenham. Judi Dench will portray Princess Dragomiroff, and Lucy Boynton Countess Andrenyi. Tom Bateman will be Bouc, while legendary Derek Jacobi is Masterman, Michael Peņa is Marquez, and Leslie Odom Jr. will be Doctor Arbuthnot.

In the television world, Starz is casting for its new sf thriller series COUNTERPART which already has two 10 episodes season ordered! Harry Lloyd and Olivia Williams have just joined JK Simmons who leads the cast as Howard Silk a lowly cog in a bureaucratic agency who discovers that the agency he works for is really guarding a crossing into a parallel dimension. Through Howard and his Counterpart on the other side, the show will navigate themes of identity, what-ifs and lost love. Olivia Williams will play his wife, a mysterious woman whose secrets become the center piece of the first season’s story. Lloyd will be a director at Howard’s agency whose carefully calibrated career slowly begins to unravel as he sinks deeper into the world of espionage and double lives. 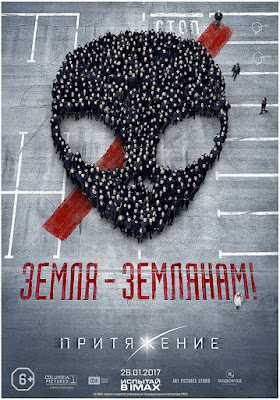 WILL LEAVE YOU STUNNED
And a stunning trailer for you coming from Russian 2017 sf movie ATTRACTION or Притяжение! Directed by Russian moviemaker Fedor Bondarchuk, it depicts the first arrival of alien ships onto planet Earth straight over Moscow ... and it seems they're not coming in a friendly manner at all judging from the mindblowing trailer below!