Cast is shaping up for the movie adaptation of Peter Cameron's novel ANDORRA with Toni Collette, Gillian Anderson and Joanna Lumley joining Clive Owen! He plays Alexander Fox, a bookseller who leaves the U.S. after a personal tragedy to begin a new life in the tiny country of ANDORRA. He quickly becomes entangled with the ever present locals. Toni Collette is Mrs Dent, an Australian with a large dog and a volatile secret. Joanna Lumley is Mrs Quay, the kayaking matriarch of an Andorran dynasty who seems to recall Fox from long ago. He finds comfort in the company of her daughter, Miss Quay (Gillian Anderson), as the mystery of his origin deepens. When a woman’s body is found soon after Fox’s arrival, the local lieutenant becomes strangely convinced that he is responsible. With his past threatening to envelop his newfound paradise, Fox finds himself in a crisis of conscience and identity, in a foreign country from which he may never  escape.


'THE SON' TRAILER FOR
PIERCE BROSNAN MINI SERIES
In the trailer section the first one has been revealed, together with the first photos, for new period set series THE SON which will air at AMC next year with Pierce Brosnan playing the 'first son of Texas'! 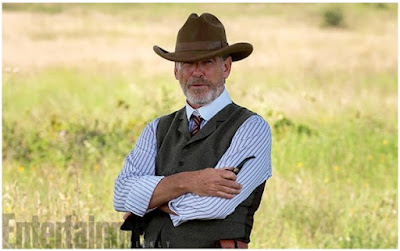 THE FIRST SON OF TEXAS
The ten episode series is  a multi generational saga that weaves between two time periods: the story of young Eli and his life with the Comanches in 1849, and Eli 60 years later as he works to maintain his 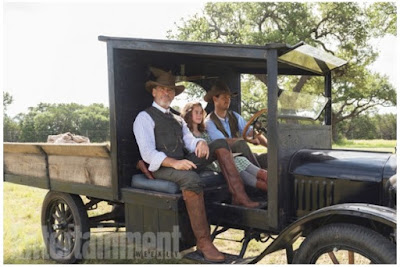 family’s cattle empire against the backdrop of the Bandit Wars of South Texas.  Henry Garrett plays Eli’s son Pete who’s struggling to make his father proud, while Sydney Lucas plays his granddaughter Jeannie, a tomboy unwilling to accept an existence of childbearing and marrying well.