Definitely one of our most beloved TV faces this year, uber dashing and ultra charismatic British thespian James Norton is on fire after WAR AND PEACE and beside scoring a role in the remake of FLATLINERS sf movie alongside Diego Luna and Nina Dobrev (about a group of young doctors who conduct near death experiments with dark consequence), he will also join Lesley Manville, Diane Keaton, Brendan Gleeson in
HAMPSTEAD
It is a part of London famous as quiet countryside in the middle of the city. Living there is American widow Emily Walters (Diane Keaton), who can’t quite focus on the things that need attention, like her lovely old apartment, her finances and even her son. One day while looking out from her attic window, she spies a ramshackle hut, which appears to be inhabited by an unkempt man Donald (Brendan Gleeson). She witnesses him being attacked by a group of professional thugs. Shocked, she calls the police and watches, through her binoculars, as help arrives. The next day she ventures into the woods in search of the man. Donald has lived quietly and harmoniously there for 17 years but now his lifestyle is under threat – his home is the target of property developers who’ve started using heavy-handed tactics to remove him.

mesmerizing! Out this September it set after the World War One, following Tom Sherbourne and his wife Isabel who live on a remote 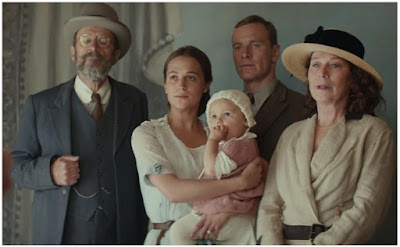 island in Western Australia, where they discover a shipwrecked boat with a dead man and a baby girl! Having always dreamt of having a

baby, they decide to raise the baby as their own, until suddenly a woman (Rachel Weisz) appears claiming to be her mother!
Posted by DEZMOND at 8:02 PM