Probably the main TV news coming to us this weekend was that Hulu will do a remake of classic series THE HANDMAID'S TALE based on Margaret Atwood's book with Elisabeth Moss taking the lead role!
DYSTOPIA OF GILEAD
It is set in the dystopian Gilead, a totalitarian society in what was formerly part of the United States. Facing environmental disasters and a plunging birthrate, Gilead is ruled by a twisted religious fundamentalism that treats women as property of the state. As one of the few remaining fertile women, Offred is a Handmaid in the Commander’s household, one of the caste of women forced into sexual servitude as a last desperate attempt to repopulate a devastated world. In this terrifying society where one wrong word could end her life, Offred navigates between Commanders, their cruel Wives, domestic Marthas, and her fellow Handmaids – where anyone could be a spy for Gilead — with one goal: to survive and find the daughter that was taken from her. 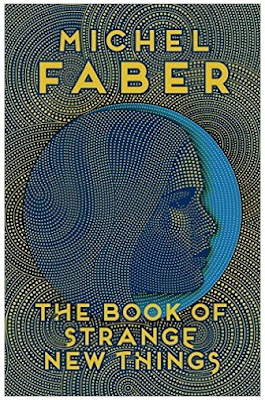 Speaking of sf, Amazon will turn Michel Faber's critically renowned book THE BOOK OF STRANGE NEW THINGS into a 10 episode series to be helmed by Kevin Macdonald with music from Brian Eno!  The story revolves around Peter Leigh, an English pastor who embarks on the journey of a lifetime into deep space that takes him light years away from his beloved wife, Bea. As' Deadline' reports, 'while the project’s scale is believed to be epic, described as “Heart Of Darkness in space, at its centre is a heart-wrenching love story of a husband and wife with the universe between them'.
Posted by DEZMOND at 7:34 PM