It's all remakes and adaptations today, people, starting with news coming from 'Deadline' about Charlie Hunnam potentially taking the role of Steve McQueen in the remake of prison break drama PAPILLON! The original movie followed a man unjustly convicted of murder in 1930s France and condemned to life in a South American prison. He plots his escape, aided by a counterfeiter (originally played by Dustin Hoffman) who finances PAPILLON’s prison escapes in exchange for protection in prison. Hunnam has finished shooting KING ARTHUR: KNIGHTS OF THE ROUNDTABLE for Warner Bros. recently.

And yet another big screen adaptation will be a movie version of Joe Sharkey's ABOVE SUSPICION which will be directed by Phillip Noyce who already cast new Ben Hur Jack Huston and GAME OF THRONES Dragon Queen Emilia Clarke for the lead roles! As 'Deadline' writes today, it is a true story of a newly married FBI poster-boy assigned to an Appalachian mountain town in Kentucky. There he is drawn into an illicit affair with an impoverished local woman who becomes his star informant. She sees in him her means of escape; instead, it’s a ticket to disaster for both of them. This scandal shook the foundations of America's top law enforcement agency, ending in the first ever conviction of an FBI agent for murder.

'OPHELIA' S VERSION OF
HAMLET TO STAR NAOMI WATTS OR DAISY RIDLEY?
Meanwhile, in the sea of the fresh adaptations of Shakespeare's plays (there's STILL STAR CROSSED, WILL and also FAMILY SHAKE- SPEARE), 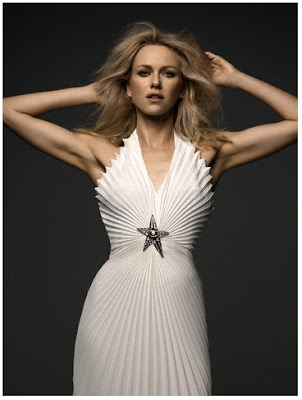 yet another one will be OPHELIA which, as 'Deadline' reports, is eyeing Naomi Watts and Daisy Ridley as potential stars. It is actually an adaptation of Lisa Klein's book which shows the story of Hamlet through the eyes of the doomed heroine who driven mad by Hamlet's behaviour and the death of her father drowns herself in the river.  Set in the 14th century but spoken in a contemporary voice, OPHELIA will put the titular character centre stage.
Posted by DEZMOND at 8:00 PM