'KOSEM SULTANA'
1ST PHOTOS FROM EPIC SERIES
Now, here's something stunning to start of the first day of summer in proper style: exactly a year ago lavish Turkish epic series THE MAGNIFICENT CENTURY ended its worldwide rule and now the same production 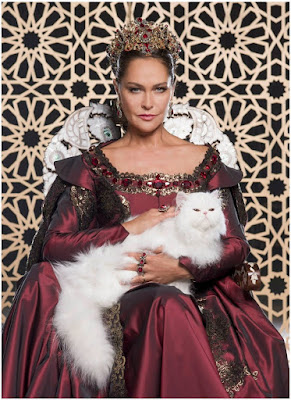 team is ready to launch an even more lavish one KOSEM SULTANA series this September! Today, you can feast your eyes on the very first photos depicting gorgeous Turkish star Hulya Avsar in the full costume as the 16th century Safiye Sultana the mother of Sultan Mehmed III. As you can see her gowns are done in English style since she maintained good relations with Elizabeth I with whom she had personal correspondence. If I got it right (my Turkish ain't so good) the white cat is also a gift from the English monarch. As I've reported earlier Beren Saat will play the lead role of KOSEM SULTANA, Sultan Ahmed I will be played by Erkan Kolcak Kostendil, while Yıldız 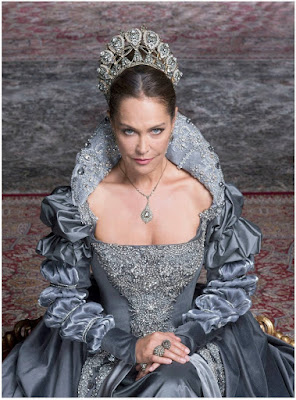 Çağrı Atiksoy will be Ayshe Sultana. The preparations took almost a year and a whole Ottoman city was built for the series.


SULTA- NATE OF WOMEN
Similarly to Hurrem Sultana, who was the hero of MAGNIFI- CENT CENTURY, Safiye also rose from being a slave in the harem to becoming sultana after she was chosen by  Hurem's daughter in law Nurbanu Sultana to be the wife of her son future sultan Murad. The main star of the series is of course KOSEM SULTANA, the wife of Safiye's grandson Ahmed I. She was a prominent figure during the Sultanate of Women (which

started with the rule of Hurrem Sultana). She was official regent twice and was thereby one of only two women to have been formal rulers of the Ottoman Empire. She came to the sultan's palace in Istanbul as a 15 year old slave girl, but quickly became influential in the harem which will be shown in the new series.