GETS RONAN KEATING, JIM BROADBENT, DAVID TENNANT!
Here's something delightful (with a naughty twist in the form of the picture :) - ready to hit cinemas in May next year is the movie adaptation of famous animated series POSTMAN PAT! The CGI movie will follow kids' favourite animated character Postman Pat as he auditions for a TV talent show in the hope of achieving fame and fortune. The update is that Irish superstar Ronan Keating, pop singer and former member of Boyzone, will lend his singing voice in the film. 'Digital Spy' reports that the voice cast will also include brilliant Jim Broadbent, Rupert Grint and David Tennant, while Stephen Mangan will give his voice to the title character.

TV SERIES
Earlier this year your trusted spy has informed you that SyFy is preparing DOMINION sf show and now the news is that they have ordered a whole season of the show which will be based on Paul Bettany's LEGION movie. Starring Christopher Egan, Tom Wisdom, Roxanne McKee, Alan Dale, Anthony Stewart Head and Luke Allen-Gale, DOMINION is an epic story set in the year 25 A.E. when an army of lower angels, assembled by the archangel Gabriel, has waged a war of possession against mankind. The archangel Michael, turning against his own kind, has chosen to side with humanity against Gabriel. Rising out of the ashes of the 25-year-long battle are newly fortified cities which protect the human survivors. In Vega (formerly Las Vegas), the largest of these cities, two houses vie for control and the stage is set for political upheaval and a dangerous power shift. Meanwhile, a rebellious young soldier begins a perilous journey as the war between the human race and the fallen angels hell-bent on their domination escalates.


TNT'S 'THE LAST SHIP' TO SAIL
NEXT SUMMER WITH ERIC DANE AND RHONA MITRA
Speaking about apocalypse, are you anxious to watch TNT's new sf action show THE LAST SHIP which should start airing sometime next summer coming from Michael Bay? Their mission is simple: Find a cure. Stop the virus. Save the world. When a global pandemic 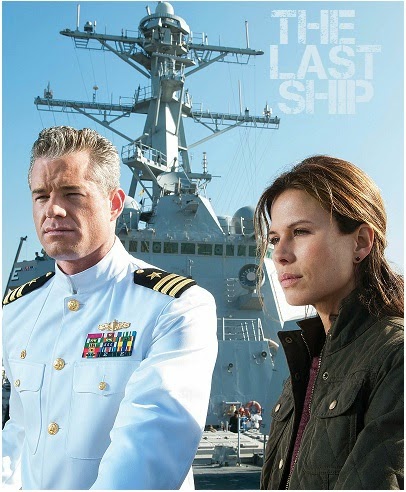 wipes out eighty percent of the planet's population, the crew of a lone naval destroyer must find a way to pull humanity from the brink of extinction. Eric Dane, Rhona Mitra and Adam Baldwin lead the crew of THE LAST SHIP left on Earth!
Posted by DEZMOND at 6:20 PM