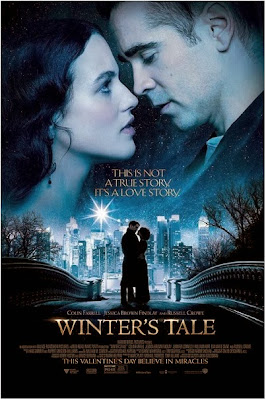 One of the enchanting magical movies ready to spellbind your late winter at the beginning of February around St. Valentines is fantasy drama and romance WINTER'S TALE with Colin Farrell, Russell Crowe and Jessica Brown Findlay. The directorial debut of Academy Award Winning screenwriter Akiva Goldsman (A BEAUTIFUL MIND), who also wrote the script for this $50 million romantic film, is based on a novel of the same name written back in 1983 by Mark Helprin. Set in a mythic New York City and spanning more than a century, WINTER'S TALE is a story of miracles, crossed destinies, and the age-old battle between good and evil.

THE TALE OF WINTER'S TALE
THIS IS NOT A TRUE STORY, THIS IS TRUE LOVE!
Back in 1916, New York City is subsumed in arctic winds, dark nights, and white lights, its life unfolds, for it is an extraordinary hive of the imagination, the greatest house ever built, and nothing exists that can check its vitality. One night in winter, Peter Lake (Colin Farrell), orphan and master-mechanic, attempts to rob a fortress-like mansion on the Upper West Side. Though he thinks the house is empty, the daughter of the house is home. In an

unexpected turn of events this event starts the love between Peter, a middle-aged Irish burglar, and Beverly Penn (Jessica Brown Findlay), a young girl, who is fatally ill and is dying. Peter believes that his love could save her. At the same time Lake is saved from the Irish insane gangster Pearly Soames (Russell Crowe), for whom he used to work and is now running from, and his gang of thugs by Athansor, a mysterious white horse who becomes his guardian angel. But when Pearly finally catches up with our hero and he seems doomed, something strange happens: he shows up in present-day Manhattan having lost his memory and befriends Virginia (Jennifer Connelly), who helps him explore his past.


WINTER'S TALE TIDBITS
WILL SMITH IN A SHORT ROLE