SEQUEL TO THE EPIC PREQUEL 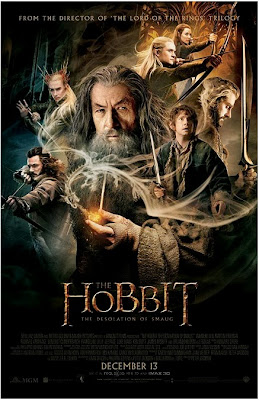 THE HOBBIT THE DESO- LATION OF SMAUG
Can you believe it, people, exactly one month till the long awaited premiere of the sequel to the epic LORD OF THE RINGS prequel THE HOBBIT THE DESOLATION OF SMAUG which will bring magic, fantasy, adventure and epic journey to cinemas December 11th! In that honour we're spotlighting the main characters and the stars of the epic movie together with all of the character posters that have been released in recent weeks! 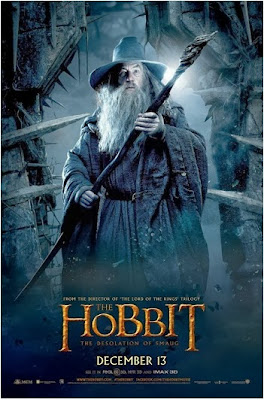 Gandalf the Grey, A Wizard that selects Bilbo Baggins to help the dwarves to go to the Lonely Mountain, is again played by Ian McKellen. He is also a member of the White Council with Cate Blanchett's Elven queen Galadriel. In the sequel Gandalf will venture into the tombs within the High Fells, trying to exhume the blade of the Witch-King of Angmar! He is supposed to meet with delightful Radagast the Brown there played by Sylvester McCoy! 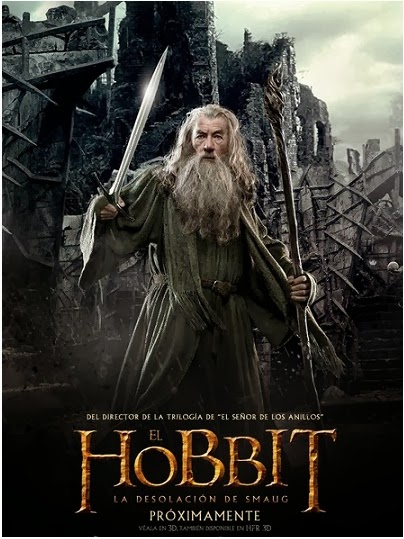 LUKE EVANS
After escaping the Elven court (using Thranduil's butler Galion's fondness for drink)  Thorin, Bilbo and the rest of the dwarves will end up in Laketown, the city of humans, where we shall meet for the first time Bard the Bowman played by Luke Evans (IMMORTALS, THE THREE MUSKETEERS, FAST AND FURIOUS 6), one of the people of the pompous Master of Laketown played by Stephen Fry. Bard will give the company a boat ride to LakeTown! Bard will be an enigmatic, Robin Hood-esque figure,  Middle-earth's finest when it comes to arrow-skills! He is the heir of Girion, the last king of old Dale. He defends the town when the dragon comes, and slays the dragon himself. In the last film he will lead the Men of Esgaroth at the Battle of Five Armies and will be crowned king of the re-founded Dale. He also has a little son Bain! 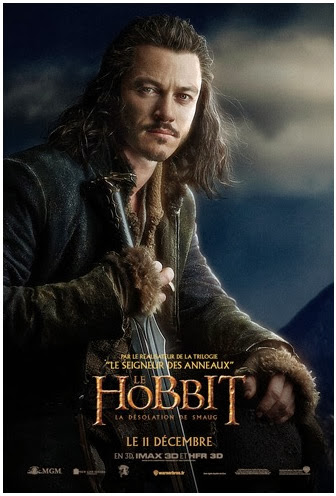 We already met Elven king Thranduil in THE HOBBIT: AN UNEXPECTED JOURNEY in which he stole the whole show: he was in it just for a minute or two but his majestic arrival into the battle on his glorious royal elk easily outshone all the hairy dwarves and them Hobbitses :) In THE HOBBIT: THE DESOLATION OF SMAUG we shall be royally introduced to his Elven Majesty Thranduil when Bilbo and his group arrive to his kingdom in the Northern part of the mystical Mirkwood. In the Elven forest, the merry group will be thrown into dungeons by the royal Elven guard after refusing to reveal their reasons for being there. The film will also show us the spellbinding beauty of Thranduil's forest court in Mirkwood.In the book itself, after evil dragon Smaug was slayed, Thranduil demanded a part of the treasure of Erebor together with the people of LakeTown which almost lead to a war. He had his share of fights with evil Sauron from LORD OF THE RINGS and even had joined efforts with queen Galadriel's husband Celeborn to cleanse their Elven woods from Sauron's evil taint. Peter Jackson had Lee Pace in mind for the role from the very beginning amazed by his warm charisma and magnetic aura in Tarsem Sing's THE FALL. 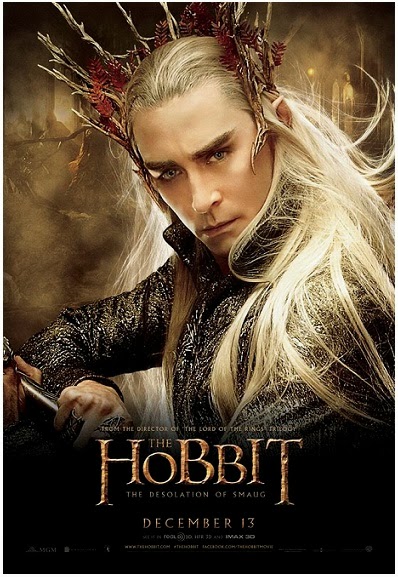 RICHARD ARMITAGE
The charismatic and brave leader of the Dwarf company which takes Bilbo into the adventure is Thorin Oakenshield played by magnetic Richard Armitage, whom the Brits know as a television star from shows such as ROBIN HOOD and SPOOKS. Seeking to return the Dwarves' mountain and their treasure from evil dragon Smaug, Thorin will take his dwarvish warriors onto the adventure which will put them in fights with goblins, Elves, and all kinds of different creatures. In the books, he is quite arrogant and ungrateful and refuses to give Elven king Thranduil and Bard their share of the treasure taken from Smaug and even fortifies the Lonely Mountain against them. But later on he had to join their forces in the famous Battle of five Armies in which he will be mortally wounded! 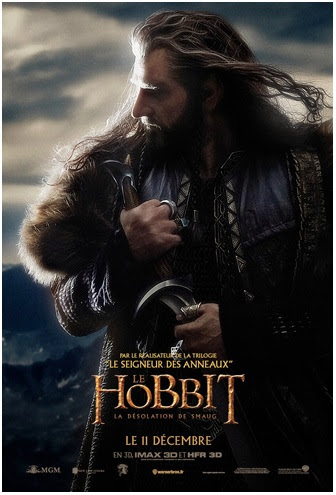 One of the most popular characters, not just in the movie adaptations of Tolkien's saga but also in movie history, Legolas is our old friend. We've already watched him in all three parts of LORD OF THE RINGS in which he represented his Elven people in the famous fellowship of the ring. We all remember his stunning battle proves, his archery skills and his refined elegance. His friendship with Dwarf Gimli, who is also a prince but a dwarvish one, helped in gradual reconciliation between Dwarves and Elves. After the adventures in LORD OF THE RINGS, Legolas founded an Elf colony in Ithilien and spent his remaining time helping to restore its devastated forests.As an elf of the Woodland Realm, and the son of Elven king Thranduil, Legolas doesn't really appear in THE HOBBIT book, but Peter Jackson added his character to the movie in order to fulfil the wishes and expectations of the audience and the fans even though the 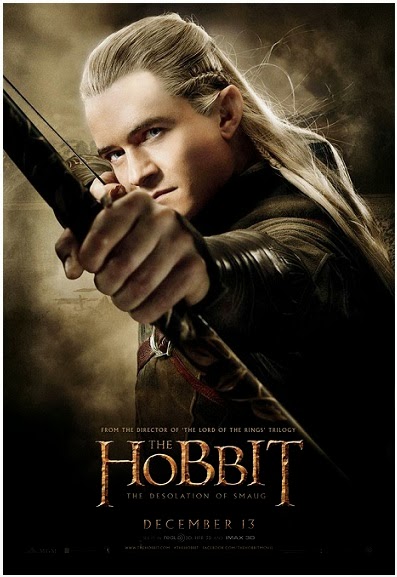 events take place almost a hundred years before LORD OF THE RINGS. Since Elven people live for thousands of years, this was possible to fulfil. Orlando Bloom, who portrays Legolas in the Middle Earth movies, became a star thanks to this role.

TAURIEL
EVANGELINE LILLY
One of the new Elven characters to appear in THE HOBBIT: THE DESOLATION OF SMAUG, is Tauriel played by LOST star Evangeline Lilly! She's a female elf from Mirkwood and also the Chief of the Guards for the Elvenking Thranduil. Her name means "daughter of the wood". She was added into the film, even though she isn't in the books, in order to incorporate female characters into the story, but Peter Jackson has confirmed there will be no romantic connection to Legolas. Unlike Legolas and Thranduil she's a redhead. Tauriel is a very young elf, only 600 years old, unlike Legolas who is 1,900 years old and Thranduil who is about 3,000 years old. Because of this she doesn't have quite the wisdom and pose thatthose two have and is more gritty, spontaneous, and passionate. Although graceful and refined as all other Elves, she is still a ruthless warrior! 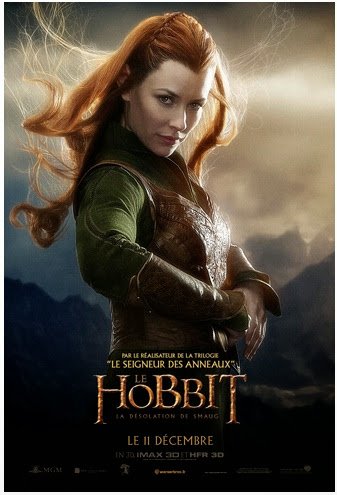 MICHAEL PERS- BRANDT
Beorn appears for the first time in the sequel played by Mikael Persbrandt. He is a skin-changer; a man who can assume the appearance of a great black bear. In the novel, he lives with his animal retinue (horses, dogs, and cows, among others) in a wooden house between the Misty Mountains and Mirkwood. Beorn receives Gandalf, Bilbo, and the 13 Dwarves and aids them in their quest to reclaim the Dwarves' kingdom beneath Erebor. He is convinced of their trustworthiness after confirming their tale of encountering the Goblins of the Misty Mountains and Gandalf's slaying of their leader, the Great Goblin.

STEPHEN FRY
Master of Laketown is played by brilliant British comedian Stephen Fry. He is the leader of the settlement of Men at Lake-town near the Lonely Mountain. Fry himself said: "My character is an opportunity for sheer grossness... Peter Jackson had me eating testicles... gross appetites. I mustn't give too much away but I've got a bald cap and then on top of that a really bad combover wig and this wispy moustache and wispy beard and horrible blotchy skin and disgusting fingernails... And generally speaking a really unappetizing piece of work. And a coward to boot and very, very greedy".
Posted by DEZMOND at 11:59 PM