MERYL STREEP TO PLAY THE LEAD IN SUSAN BOYLE BIOPIC? GRANT GUSTIN TO GET STANDALONE PILOT AS 'THE FLASH'! TIM ALLEN IN 'THE ADVENTURES OF THE PENGUIN KING' DELIGHTFUL TRAILER

MERYL STREEP TO PLAY
SUSAN BOYLE IN A BIOPIC?!?

Well, here's a delightful piece of news this Tuesday: British singing star Susan Boyle (who became an overnight sensation when she appeared at a British singing talent show looking like a plump housewife and then vowed the crowds with some opera singing) will have her own biopic made by Fox Searchlight who bought the rights on her story, but she has now revealed that no other than Meryl Streep has been approached by the producers with the offer to take the lead role. This isn't actually all that surprising since we've seen Meryl doing unbelievable physical transformations for her roles. Four years ago there was also a rather charming gossip about Robin Williams being offered the very same role too. Just picture it, I think he would be amazing in it too!


GRANT GUSTIN'S THE FLASH
GETS A STANDALONE PILOT!

Meanwhile, in television news, Deadline reports that instead of presenting The Flash in episodes of THE ARROW show and using the last season episode of that show as a backdoor pilot episode for THE FLASH, the red costumed hero will now get his own separate pilot. He will appear in episodes 8 and 9 of THE ARROW but will then get his separate show pilot in which he will appear for the first time in his red costume. This happened after the producers have seen those two episodes with The Flash which were very well received. Grant Gustin, who plays THE FLASH in THE ARROW will appear in those two episodes only as Barry Allen, the man who later on becomes the super fast hero THE FLASH. Now the standalone pilot will delve deeper into his own story. There were rumours that Grant Gustin might play The Flash in future JUSTICE LEAGUE movie too!


TIM ALLEN IN ADVENTURES
OF THE PENGUIN KING TRAILER!
If you are looking for a relaxing and fun film to watch with your kids and the family these holidays, here is something for you: ADVENTURES 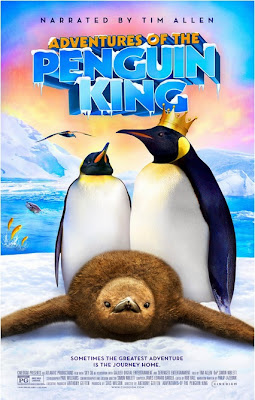 OF THE PENGUIN KING is a mixture of documentary adventure and comedy with famous comedian Tim Allen voicing the lead real life penguin whose adventures are followed in the film by cameras. The film follows Rex – a King Penguin voiced by Tim Allen – starting as a young King Penguin living near the remote island of South Georgia also known as “Penguin City,” a sub-Antarctic habitat that plays host to leopard and elephant seals, albatrosses, and six million penguins. After years at sea as a bachelor, Rex’s adventure begins when he ventures to start a family. The movie is out December 6th!
Posted by DEZMOND at 11:58 PM