Since it's been an extremely poor week in movie news business, today we spotlight a few of the upcoming period set television series! Starting with Clive Owen's mini series THE KNICK which will air over at Cinemax some time next year! Steven Soderbergh directed and produced drama is set in downtown New York in 1900 focusing on Knickerbocker Hospital and the ground breaking surgeons, nurses and staff who push the bounds of medicine in a time of astonishingly high mortality rates and zero antibiotics. Andre Holland, Juliet Rylance, Eve Hewson and Michael Angarano will all play surgeons and nurses. You can see some of the first pictures of  Clive Owen and Juliet Rylance in costumes from the series. Rylance will play a beauty who does social work the hospital helping it survive the tough times, while 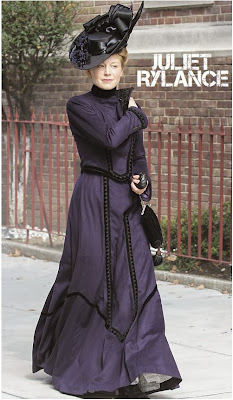 Andre Holland will appear in the series as a talented African American Harward trained surgeon battling race barriers in turn-of-the-century America. Eve Hewson will play Lucy, a young, naive nurse from the South who, like tens-of-thousands of others, has come to New York for adventure and finds more of it than she ever thought she would. Michael Angarano will play Dr. Bertram, an eager surgeon-in-training who gives up the chance to practice uptown in a wealthy hospital, for the romance and excitement of learning from a ground breaking surgeon in the chaotic, downtown world of The Knick. The shooting of the series is currently underway over in New York's Lower East Side which has been given a last century look with straw covered streets, horses and carriages!

Another historical series will come to us over at AMC. Titled TURN the ten episode series will be set in the summer of 1778, telling the story of New York farmer, Abe Woodhull (Jamie Bell), who bands together with a group of childhood friends to form The Culper Ring, an unlikely group of spies who turn the tide in America's fight for independence. Rupert Wyatt (RISE OF THE PLANET OF THE APES) has been hired to direct the opening episode of the new show which is actually based on Alexander Rose’s book 'Washington Spies'. Written by Craig Silverstein (‘Nikita’) and executive produced by ‘Bones’ Barry Josephson, the series will also have DOWNTON ABBEY's Kevin McNally as the local magistrate and Abe’s well-respected father. Angus Macfadyen will play Robert Rogers, a feared and admired war hero who fought alongside George Washington in the French and Indian war but has fallen from grace following a return to England where he has gambled away his fortune and lapsed into alcoholism.

And you can also check out the first look of Josh Hartnett in another period set show PENNY DREADFUL which is coming to Showtime some time next year. Set in the Victorian London,  the series, described as a study of sex and psychology, will weave together the origins of literary horror characters, such as Victor Frankenstein, Frankenstein's monster, Dorian Gray, and Count Dracula, as they grapple with their monstrous alienation in the 19th century British capital. Produced by Oscar winner Sam Mendes, the series will see Josh Hartnett as Ethan Chandler, a charming, brash, daring man of action who is unafraid of violence and more complicated than he likes to admit. Eva Green is Vanessa Ives, an enigmatic, composed heroine who proves herself a force to be reckoned with. Billie Piper is Brona Croft, an Irish immigrant seeking to escape her dark past. Timothy Dalton is Sir Malcolm, a hardened African explorer on a deeply personal quest. Reeve Carney is Dorian Gray, a confident, mesmerizing, yet somewhat isolated man! Harry Treadaway is Victor Frankenstein, Helen McCrory is Madame Kali, a spiritualist. Simon Russell Beale is Ferdinand Lyle, an eccentric Egyptologist.
Posted by DEZMOND at 11:58 PM