KATE WINSLET & COLIN FIRTH
IN 1960'S YACHT RACE CHEAT DRAMATIC MOVIE
So, people, we're having a Kate Winslet Sunday today at HOLLYWOOD SPY, and I'm absolutely sure none of you will complain :) First, some

news on her new gig: 'Daily Mail' reports that Kate Winslet and Colin Firth are negotiating to take the lead roles in a movie about an infamous yacht racing cheat from four decades ago! Named Donald Crowhurst, he duped his family, race organisers and the public into believing that he had spent 240 days circumnavigating the globe in a prestigious single handed, non-stop odyssey. Firth would portray Crowhurst, with Winslet playing his wife, Clare — who was known at the time as the ‘sea widow’. He set out in 1968 and was expected to return home the following year. The public followed his "incredible endurance on treacherous oceans" with great excitement and interest. He was so far behind the other racers that he set in motion a plan to deceive the world by falsifying his locations on the ship-to-shore messages sent from his Marconi radio! He slowly went mad, trying to keep up with his deceptions about his whereabouts. His wife, the mother of four, meanwhile had to cope alone without him in the house. She was forced to go on the dole, because her home and Crowhurst’s business were all financially wrapped up in the duplicitous voyage.

KATE WINSLET TIDBITS
Kate Winslet is currently expecting her third baby (a son) with her third husband Ned Rocknroll, the nephew of famous millionaire Richard Branson, who fell in love with her after she saved his grandmother from a huge fire on Branson's private island. She has a son with SKYFALL director, Oscar winner Sam Mendes too. Believe it or not, she has won only one Oscar, even though she was nominated six times. Next year we shall again see her in a period costume in A LITTLE CHAOS in which she, Matthias Schoenaerts and Alan Rickman star in the story about a pair of landscape gardeners who compete to design a fountain at Versailles for Louis XIV. 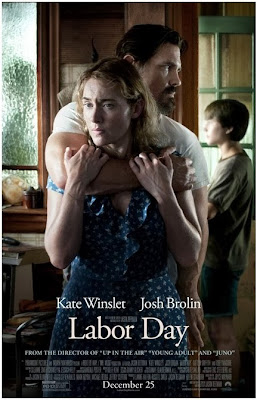 And the first trailer has been released for a drama which might bring Kate Winslet new Oscar nominations next year. LABOUR DAY will be released this Christmas with Kate playing depressed single mom Adele who, together with her son Henry, offers a wounded, fearsome man a ride. As police search town for the escaped convict, the mother and son gradually learn his true story as their options become increasingly limited. Directed by Jason Reitman (JUNO, YOUNG ADULT), the movie also has Josh Brolin as the convict, Gattlin Griffith as her son, with Tobey Maguire (he and Dylan Minnette play Henry at older ages) and James Van Der Beek also in the cast.
Posted by DEZMOND at 11:59 PM