WARNER BROS. SECRETLY PREPARING "JUSTICE LEAGUE" MOVIE AND HAS THE LIST OF THE POSSIBLE SUPERHEROES IN IT

Since Marvel is planning to unite most of its superheroes in "The Avengers" movie which is to be directed by Joss Whedon, DC must strike back and Warner Bros. has allegedly given a tentative green light to the "Justice League" project. Not only that the project isn't dead but the studio is apparently already secretly searching for the possible actors. 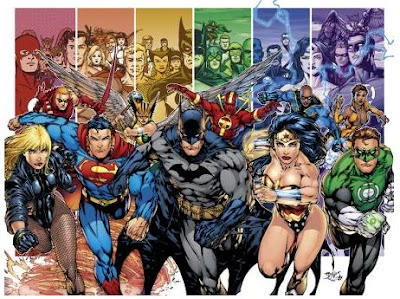 According to "Acesshowbiz" the basic plot has been outlined and there is already a list of DC superheroes who will be featured in the film: Green Lantern, The Flash, Wonder Woman, Aquaman and Martian Manhunter are apparently in the line up for now, and Superman and Batman might make their way into the script as well.
Of course, "Justice League" movie will not happen any time soon, since DC will first release "Green Lantern" next year with Ryan Reynolds, and "The Flash" a year or two after that. Things might get complicated because there are also some rumors that "Green Lantern" already has two sequels planned for 2012 and 2013 if the first part earns good money. Hopefully, Wonder Woman will get her solo movie some day as well :)
Posted by DEZMOND at 11:09 PM