VIDEO THURSDAY: TRAILERS FOR 'A WALK IN THE WOODS' WITH ROBERT REDFORD, EMMA THOMPSON, NICK NOLTE, 'THE END OF THE TOUR' WITH JESSE EISENBERG AND JASON SEGEL

'A WALK IN THE WOODS' TRAILER
WITH ROBERT REDFORD, EMMA THOMPSON AND NICK NOLTE
Two trailers for you today, first one up for new comedy drama from Robert Redford and Nick Nolte A WALK IN THE WOODS out this Autumn. It follows celebrated travel writer, Bill 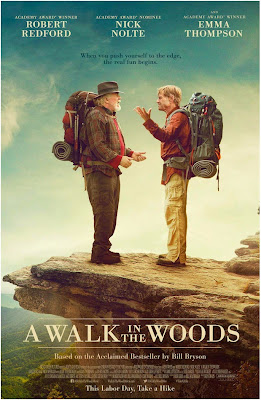 Bryson (Robert Redford) who, instead of retiring to enjoy his loving wife (Emma Thompson), and his family, challenges himself to hike the Appalachian Trail, 2,200 miles of America's most unspoiled and rugged countryside from Georgia to Maine. The peace and tranquillity he hopes to find, though, is anything but, once he agrees to being accompanied by the only person he can find willing to join him on the trek, his long lost and former friend Katz (Nick Nolte), a  serial philanderer who, after a lifetime of relying on his charm and wits to keep one step ahead of the law, sees the trip as a way to sneak out of paying some debts and sneak into one last adventure before its too late. The trouble is, the two have a completely different definition of the word "adventure"! 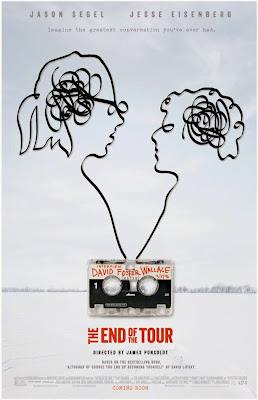 interview between Rolling Stone reporter (and novelist) David Lipsky (Jesse Eisenberg) and acclaimed novelist David Foster Wallace (Jason Segel), which took place right after the 1996 publication of Wallace's ground breaking epic novel, Infinite Jest. As the days go on, a tenuous yet intense relationship seems to develop between journalist and subject. The two men bob and weave around each other, sharing laughs and also possibly revealing hidden frailties - but it's never clear how truthful they are being with each other.
Posted by DEZMOND at 1:20 PM