already started production! The fun thing is that Marion Cotillard will play the female lead, rejoining Fassy again after MACBETH! To be released in December 2016, the film will see Fassbender playing two characters in different timelines. In the present day he will be Michael Lynch, a death row inmate who becomes a pawn in a war between the Assassins and the Templars. He becomes the subject of several experiments by an evil scientist named Joseph, although he gets help along the way by a character named Lara. He will also be an assassin named Aguilar de Agarorobo in scenes set during the Spanish Inquisition. Justin Kurzel is directing.


LUKE EVANS TO GET
'MESSAGE FROM THE KING'

Another favourite star of ours, Welsh hunk Luke Evans is taking a break from leading roles and will do a supporting one in MESSAGE FROM THE KING in which, according to 'Hollywood Reporter', Chadwick Boseman plays a man from South Africa named Jacob King who descends into the Los Angeles underworld in an attempt to avenge his sister and rescue her stepson from the immoral world into which he's been sold. Luke Evans will play a Beverly Hills cosmetic dentist who provides services both legal and illegal and offers to help King find his sister. Theresa Palmer will play a mother who turns tricks to support both her drug habit and 6-year-old daughter. Alfred Molina will play a Hollywood producer who has underworld connections and may or may not know where the stepson is.


'CRIMSON PEAK' TRAILER
TOM HIDDLESTON SHINES IN THE VICTORIAN HORROR
A rather stunning first trailer has been released for dark Ghotic horror CRIMSON PEAK with our beloved Tom Hiddleston shining in it like the sun! Out this October, the is set in the aftermath of a family 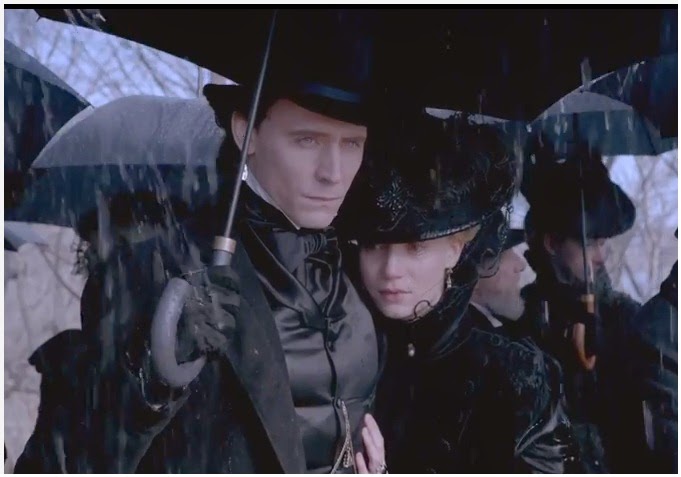 tragedy, and follows an aspiring author who is torn between the love for her childhood friend and the temptation of a mysterious outsider. Trying to escape the ghosts of her past, she is swept away to a house that breathes and bleeds and ... remembers. Mia Wasikowska and Charlie Hunnam also star.
Posted by DEZMOND at 2:00 PM