SHANNARA which has a new cast addition: young Ivana Baquero, who played the little girl in PAN'S LABYRINTH, will star in the ten episodes of the epic series set in our world, thousands of years after the destruction of our civilization. The descendants of the SHANNARA family are empowered with ancient magic and their adventures continuously reshape the future of the world. Ivana Baquero will play Eretria, a young woman from the wrong side of the tracks who’s been forced to use her beauty and wits to survive. She’s a human who has been raised in a den of thieves known as the Rovers. When she rescues elven prince Will (Austin Butler) from danger she becomes unwittingly tied to his and his sister Amberle’s (Poppy Drayton) quest to save the Four Lands. Aaron Jakubenko and Manu Bennett are also in the cast!


TELEVISION HEADLINES
MARCO POLO GETS 2ND SEASON, NEW SITCOMS UPDATES
In other quick TV updates, beside the info that Netflix has ordered the second season of MARCO POLO epic series, they have also set March 6 date for UNBREAKABLE KIMMY SCHMIDT sitcom and May 8 for GRACE & FRANKIE sitcom

with Jane Fonda and Lily Tomlin! ABC Family has, meanwhile, ordered KEVIN FROM WORK workplace comedy about a young man unluckily in love who professes his love to a co-worker, thinking he'll never see her again after he accepts a job offer overseas. But then that job offer is rescinded, and now they have to continue to work with each other.
LIAM MCINTYRE JOINS 'THE FLASH'
And over at CW they have hired another SPARTACUS star, Liam McIntyre to star in THE FLASH! He will play  Mark Mardon, the brother of Clyde Mardon (Chad Rook), who appeared as the Weather Wizard in the series premiere. Mark returns to Central City to get justice for his brother’s untimely death and uses his powers, similar to Clyde’s, to go on a rampage and find the man that shot Clyde. 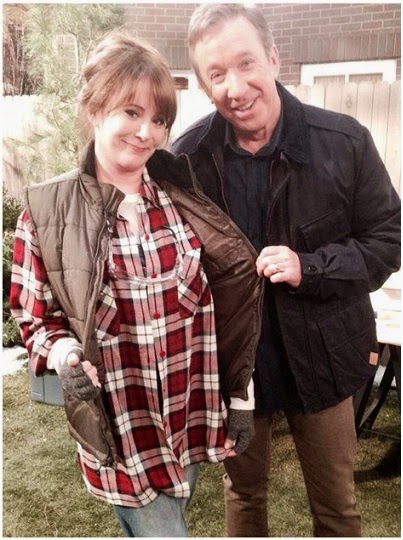 Richardson! On Friday’s episode, Mike (Tim Allen) will butt heads with his new neighbour Helen (Patricia Richardson), who loves working with power tools very early in the morning. Trailer below is only available for US :(
Posted by DEZMOND at 2:30 PM