IN 'THE GOLDEN LADY'
Her Cinematic Highness Helen Mirren, who won a BAFTA last weekend, is negotiating to take the lead role in THE GOLDEN LADY which will be directed by MY WEEKEND WITH MARILYN helmer Simon Curtis. According to 'Daily Mail', the movie, based on a true story, would tell the story of Maria Altmann, a Jewish refugee who launched a legal battle back in the 1980s in order to reclaim five paintings by Gustav Klimt which were stolen by the Nazis. Among those paintings was 'The Lady In Gold', portrait Of Adele Bloch Bauer I, which is worth over $130 million.

DEZZY'S ART LESSON
Although the heirs of the original owner of THE LADY IN GOLD painting won the case at court against the state of Austria, they sold it some years after for the above stated sum of money to Neue Galerie in New York, where you can still see it displayed today!  Made of oil and gold on canvas, it took three years to be painted, and it was commissioned by Adele's rich husband, sugar magnate!

DAVID JAMES ELLIOTT IN
'HERE'S YOUR DAMN FAMILY' SITCOM AT FOX
In TV news, 'Deadline' writes that David James Elliott will head the cast of HERE'S YOUR DAMN FAMILY sitcom at Fox! The comedy will focus on a stunted, set-in-his-ways thirty something man living with his mom (Jane Kaczmarek) who finds his perfectly organized world upended when she gets married — and her new husband (Elliott) plus his three teenage children move in. Elliott’s Mike is a ruggedly handsome, straightforward, ‘man’s man’ widower.

BBC 'CRIMSON FIELD' WWI HISTORICAL SERIES
Check out the first picture from BBC's new six part mini series THE CRIMSON FIELD (it was previously titled THE ARK) which will air this spring in April marking the 100 years after the start of World War I. Starring British stars Kevin Doyle, Richard Rankin, Alex Wyndham, Hermione Norris and Oona Chaplin,  it will tell the touching and intriguing story of a team of doctors, 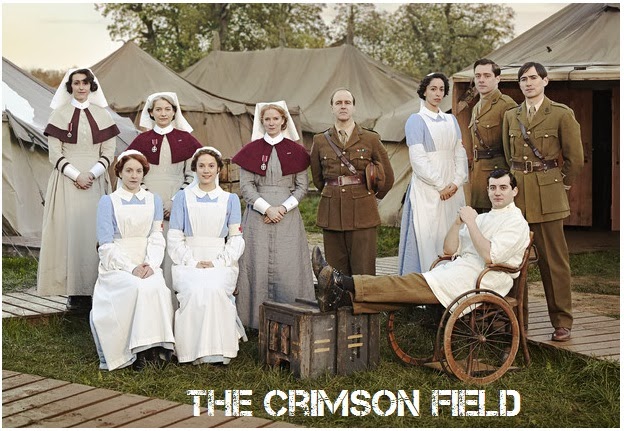 nurses and women volunteers working together to heal the bodies and souls of men wounded in the trenches of the First World War.

CW HIRES MATT BARR
FOR NEW 'IDENTITY' SHOW
Meanwhile, over at CW they have just hired Matt Barr (HATFIELDS AND MCCOYS) to star opposite Ahna O'Reilly in new show IDENTITY!  A rather tricky story follows Mia (O’Reilly), a young New Yorker who learns she needs an organ transplant to survive and her only living relative is a newfound half-brother, Davis (Barr), the charming, privileged only son of a wealthy and powerful Charleston family. She connects with them only to find they’re the target of a CIA investigation for involvement in domestic terrorism, and the agency wants her as their newest informant. As Davis bonds with his newfound sister, he begins to question his family’s nefarious plans.