GARFIELD TO 17TH CENTURY JAPAN
In today's news from the historical genre, Deadline reports that Martin Scorsese has found his lead actors for upcoming epic drama SILENCE! Liam Neeson will join Andrew Garfield and Ken Watanabe in the movie which will be a big screen adaptation of Shusaku Endo's novel in which the story revolves around Father Rodrigues (Andrew Garfield), a Portuguese Jesuit priest from the 17th century who travels to Japan upon hearing that his mentor has abandoned the church. Liam Neeson will play the mentor, while Ken Watanabe will portray Rodrigues' Japanese interpreter! Scorsese is both helming and writing the script.


FIRST IMAGES FROM SYFY'S
'DOMINION' SF EPIC SHOW
SyFy has released first images from their new sf show DOMINION which, based on Paul Bettany's LEGION film, is an epic supernatural drama set in the year 25 A.E. when an army of lower angels, assembled

by the archangel Gabriel, has waged a war of possession against mankind. The archangel Michael, turning against his own kind, has chosen to side with humanity against Gabriel. Rising out of the

ashes of the 25-year long battle are newly fortified cities which protect human survivors. Chris Egan, Tom Wisdom, Anthony Stewart Head and Alan Dale lead the cast of the show which will air this June!

2ND WINTER'S TALE TRAILER
COLIN FARRELL, RUSSELL CROWE
And your trailer for today is the second, deeply magical and enchanting one, for WINTER'S TALE which hits theatres this Valentines Day. You can read more in our spotlight on the film in which Jessica Brown 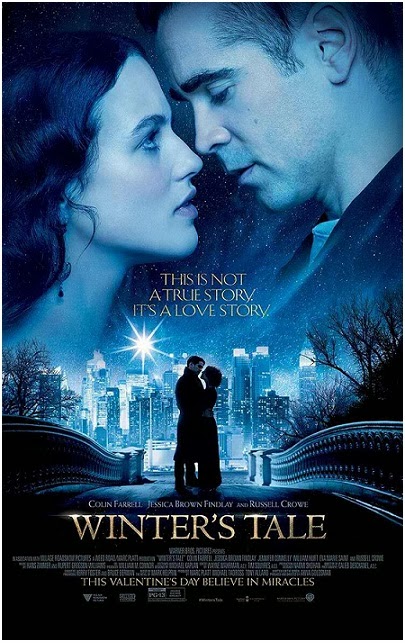 Findlay and Colin Farrell bring us the mythic tale of the love between a dying woman and a thief, in a time-jumping story that spans more than a century. Jennifer Connelly, William Hurt, Eva Marie Saint and Russell Crowe are also in the cast!
Posted by DEZMOND at 5:52 PM