MAGGIE Q IN 'RED FLAG' SERIES
AS 18TH CENTURY PIRATE QUEEN
If you think you will miss Maggie Q after the end of NIKITA, do not despair, she is coming back in royal style: she will lead the cast in new epic television mini series on legendary Chinese queen of the pirates Ching Shih! According to 'Deadline', the new series RED FLAG is set in the early 1800s and centres on Ching Shih, a beautiful young Chinese prostitute who goes on to become one of history’s most powerful pirates and head of the most successful crime syndicate in China. With over 100,000 sailors and 1500-plus vessels, Ching controlled the South China Sea while taking on the Imperial Chinese navy, the Portuguese navy, and the all powerful British navy to eventually conquer them all. The series will be produced by Steven Jensen who is also preparing mini series on HANNIBAL BARCA of Carthage for History!


SALMA HAYEK TO HAVE
A THREE DOG LIFE!

In other news, Salma Hayek will join John Travolta in A THREE DOG LIFE a film based on Abigail Thomas' memoirs: when Abigail Thomas' (Hayek) husband, Rich (Travolta), gets hit by a car, his brain is shattered and he has no memory of his past life. Subject to hallucinations, rage and terror, he is forced to live in an isolated institution to control the side effects of his near-death accident. In order to be close to her husband, Abigail reinvents her life and moves from New York City to the small country town, with her new family of three dogs.
REDSHIRTS SF SHOW AT FX
FX is planning REDSHIRTS sf TV show! Based on John Scalzi's Hugo Award winning novel  which is set in the 25th century, the story follows the adventures of five new recruits on the Starship Intrepid who come to realize that the ship’s crewmembers are dying at an alarming rate. Their investigation leads to the mind-bending discovery that a science fiction television show, produced in the early 21st century, has somehow “intruded” upon their reality and that their lives are following the course of a television narrative!


TWO FACES OF JANUARY TRAILER
WITH KIRSTEN DUNST, OSCAR ISAAC AND VIGGO MORTENSEN!
Your trailer for today comes from THE TWO FACES OF JANUARY, which opens in UK this May starring Viggo Mortensen, Kirsten Dunst and Oscar Isaac! The big screen adaptation of Patricia Highsmith's novel is set in 1962 when the American couple Chester 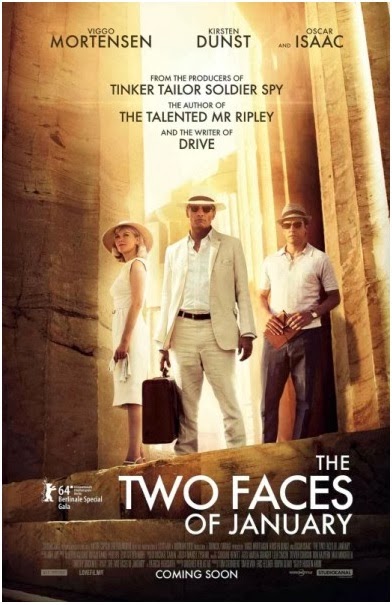 MacFarland (Mortensen) and his wife Colette (Dunst) tour Greece and visit the Acropolis of Athens. There, they meet Rydal (Isaac), who works as a tour guide but scams tourists in the process. The MacFarlands invite Rydal to dinner, and Rydal, entranced by the couple's wealth and beauty, accepts their invitation. While Rydal visits the MacFarlands' hotel, Chester presses him to help move an unconscious body. Rydal helps, but eventually gets caught up in ensuing events. He also becomes infatuated with Colette and runs the risk of provoking Chester's ire. This all leads them to a tense and dangerous battle of wits between the two men. Their journey takes them from Greece to Turkey, and to a dramatic finale played out in the back alleys of Istanbul’s Grand Bazaar.
Posted by DEZMOND at 6:20 PM