WILLIAM WALLACE AND ROBERT BRUCE
Glorious news, people, more new epic shows for us! Discovery is joining the trend of documentary channels making scripted shows, and their choice is a Ridley Scott produced historical show on Scottish legends William Wallace and Robert Bruce! According to THR, the series will be based on Nigel Tranter's books THE WALLACE AND THE BRUCE trilogy! It will explore the two Scottish patriots as well as the Scottish unrest and turbulence in 1296 after King Edward I of England invaded Scotland and imposed English rule. Edward I’s reign over Scotland never was peaceable, and Scottish discontent was widespread. In 1297, the country erupted in an open revolt as national resistance developed into a war of independence during which William Wallace and Robert Bruce played leading roles. You have seen Wallace's story in Mel Gibson's BRAVEHEART!

KLONDIKE ALREADY IN WORKS
This will, actually, be Discovery's second scripted series, since their first KLONDIKE is already in production. Starring Richard

Madden, Chris Cooper, Abbie Cornish, Tim Roth, it will follow six strangers and their fight for survival and wealth in a frontier town in the remote Klondike! Read more here! 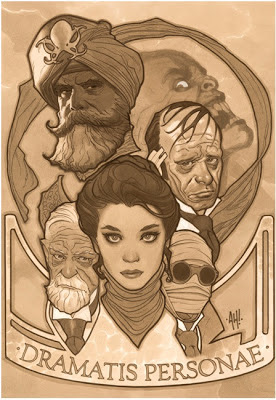 Another great piece of television news today comes from Fox where they are apparently adapting LEAGUE OF EXTRA- ORDINARY GENTLEMEN into a TV show! Legendary graphic novel from Alan Moore and Kevin O'Neill is getting a pilot first. As you probably remember from the great 2003 big screen adaptation which featured Sean Connery, Peta Wilson and Stuart Townsend, the story revolves around a group of Victorian age literary characters, including Captain Nemo, the Invisible Man, Allan Quatermain, Mina Harker and Dr. Jekyll and Mr. Hyde, who team up to fight a common enemy!

'OBJECT OF BEATY' AND 'HOW STARBUCKS SAVED MY LIFE'
THR writes about two new movie adaptations of bestselling books. Steve Martin's OBJECT OF BEAUTY will be adapted by Ned Benson and will have Amy Adams playing a young art entrepreneur who climbs from assistant to gallery owner, from a tiny downtown studio to a posh uptown one bedroom. The story traces her life over 15 years as she travels the world and falls in and out of relationships. The same site also reports that Robert Nelson Jacobs, the writer of heartwarming CHOCOLAT (for which he got an Oscar nomination), has been hired to adapt HOW STARBUCKS SAVED MY LIFE by Michael Gates Gill. The book tells the story of an older advertising executive who loses his job and family and has to go work at Starbucks to pay the bills. He befriends a young manager at the coffee shop and learns about life and love.
Posted by DEZMOND at 12:00 AM