HOLLYWOOD SPY has decided to spotlight the most popular characters in the fantasy saga - the magical Elves of Mirkwood!


ELVENKING THRANDUIL
THE RULER OF THE SYLVAN ELVES OF MIRKWOOD

We already met Elven king Thranduil in THE HOBBIT: AN UNEXPECTED JOURNEY in which he stole the whole show: he was in it just for a minute or two but his majestic arrival into the battle on his glorious royal elk easily outshone all the hairy dwarves and them Hobbitses :) In THE HOBBIT: THE DESOLATION OF SMAUG we shall be royally introduced to his Elven Majesty Thranduil when Bilbo and his group arrive to his kingdom in the Northern part of the mystical Mirkwood. In the Elven forest, the merry group will be thrown into dungeons by the royal Elven guard after refusing to reveal their reasons for being there. The film will also show us the spellbinding beauty of Thranduil's forest court in Mirkwood.
In the book itself, after evil dragon Smaug was slayed, Thranduil demanded a part of the treasure of Erebor together with the people of LakeTown which almost lead to a war. He had his share of fights with evil Sauron from LORD OF THE RINGS and even had joined efforts with queen Galadriel's husband Celeborn to cleanse their Elven woods from Sauron's evil taint.
ELVEN TIDBITS
I have already told you before that Thranduil, played in the film by brilliant Lee Pace, is the father of everybody's beloved Legolas. 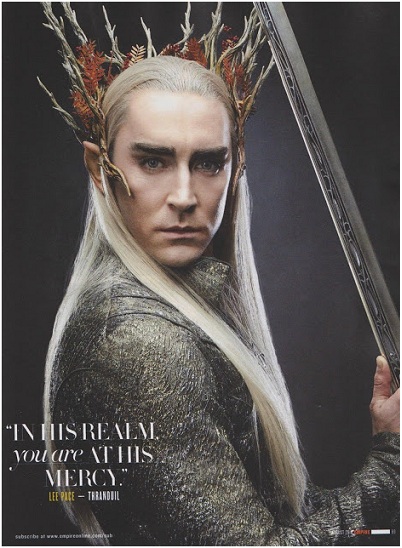 Peter Jackson had Lee Pace in mind for the role from the very beginning amazed by his warm charisma and magnetic aura in Tarsem Sing's THE FALL.

THE BELOVED ELVEN HERO
One of the most popular characters, not just in the movie adaptations of Tolkien's saga but also in movie history, Legolas is our old friend. We've already watched him in all three parts of LORD OF THE RINGS in which he represented his Elven people in the famous fellowship of the ring. We all remember his stunning battle proves, his archery skills and his refined elegance. His friendship with Dwarf Gimli, who is also a prince but a dwarvish one, helped in gradual reconciliation between Dwarves and Elves. After the adventures in LORD OF THE RINGS, Legolas founded an Elf colony in Ithilien and spent his remaining time helping to restore its devastated forests.

ELVEN TIDBITS
As an elf of the Woodland Realm, and the son of Elven king Thranduil, Legolas doesn't really appear in THE HOBBIT book, but Peter Jackson added his character to the movie in order to fulfil the wishes and expectations of the audience and the fans even though the events take place almost a hundred years before 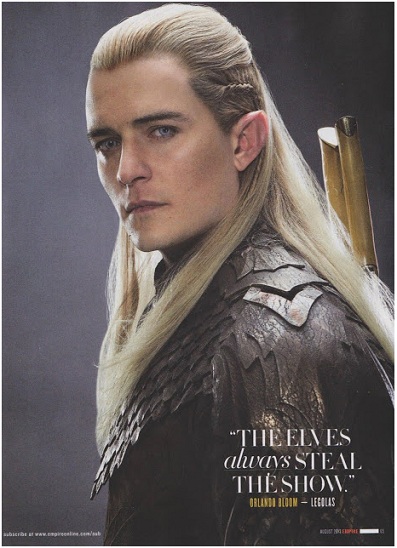 LORD OF THE RINGS. Since Elven people live for thousands of years, this was possible to fulfil. Orlando Bloom, who portrays Legolas in the Middle Earth movies, became a star thanks to this role.

EVANGELINE LILLY BRINGS FEMALE ELVEN POWER
One of the new Elven characters to appear in THE HOBBIT: THE DESOLATION OF SMAUG, is Tauriel played by LOST star Evangeline Lilly! She's a female elf from Mirkwood and also the Chief of the Guards for the Elvenking Thranduil. Her name means "daughter of the wood". She was added into the film, even though she isn't in the books, in order to incorporate female characters into the story, but Peter Jackson has confirmed there will be no romantic connection to Legolas. Unlike Legolas and Thranduil she's a redhead. Tauriel is a very young elf, only 600 years old, unlike Legolas who is 1,900 years old and Thranduil who is about 3,000 years old. Because of this she doesn't have quite the wisdom and pose that 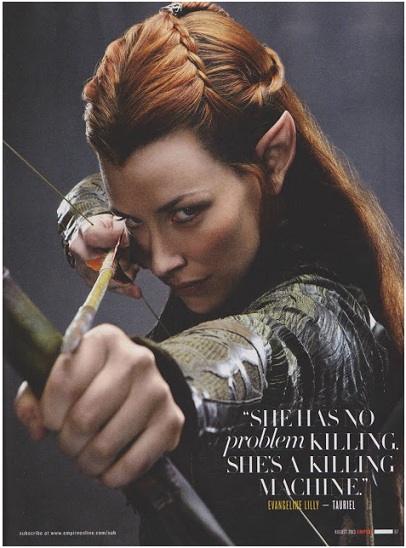 those two have and is more gritty, spontaneous, and passionate. Although graceful and refined as all other Elves, she is still a ruthless warrior!
Posted by DEZMOND at 12:00 AM