One of the films which stirred the audience around the world and touched many movie critics at film festivals this year, THE IMPO- SSIBLE, is finally ready to open up in Northern American cinemas 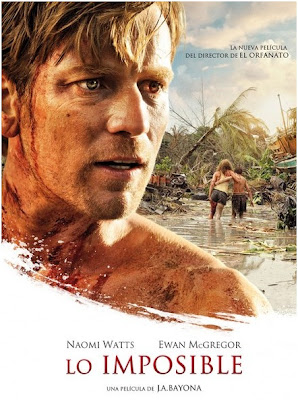 December 21st after it already premiered in Spain, Serbia and Canada earlier this Autumn. The shocking story is based on a tragic event which hit an unfortunate family when back in 2004 disastrous tsunami destroyed South Asia becoming the biggest natural disaster in history with the death toll of shocking 250,000 people! Directed by Juan Antonio Bayona, whom you remember as the helmer of THE ORPHANAGE, the film stars Ewan McGregor, Naomi Watts, Geraldine Chaplin and young Tom

Holland, in the account of a family caught, with tens of thousands of strangers, in the mayhem of one of the worst natural catastrophes of our time. You can check out the new trailer below! 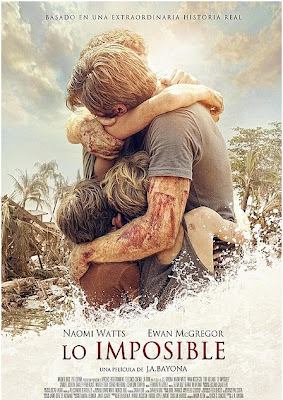 In the epic drama Ewan McGregor and Naomi Watts star as a family caught in the tsunami that hit Thailand seven years ago: Maria, Henry and their three sons begin their winter vacation in Thailand, looking forward to a few days in tropical paradise. But on the morning of December 26th, as the family relaxes around the pool after their Christmas festivities, a terrifying roar rises up from the center of the earth. As Maria freezes in fear, a huge wall of black water races across the hotel grounds toward her. 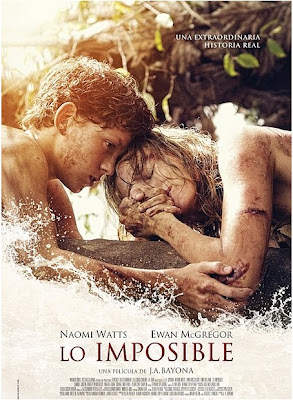 Henry grabs the two youngest boys, but it’s too late: the wave smashes into him with incredible force and dislodges his grip. Maria is pushed underwater, where she is crushed and battered by debris to the brink of death. She finally surfaces in a raging black sea, which has completely submerged her three-story hotel and the surrounding landscape. Maria gasps for breath while she tries to understand what has just happened, convinced that her family has been obliterated in the blink of an eye. But then, her eldest son, 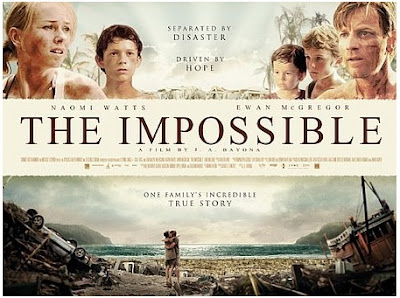 surfaces a few meters ahead in the wild flood. Face-to-face with something unexpected and incomprehensible, she must fight against all odds for her child’s survival. And her own. 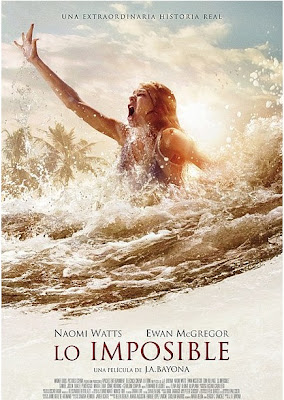 Speaking for a magazine, Naomi Watts has revealed that she escaped death and nearly drowned at the sets of the film  when a wall of water came over her while she was strapped to a chair. While they were shooting in a water tank they weren't really acting, they were really scared and terrified! After its premiere over in Spain, THE IMPOSSIBLE surpassed the unbeatable AVATAR in earnings becoming the biggest movie hit at the Pyrenean Peninsula! It earned its budget of about 30 million euro only from the 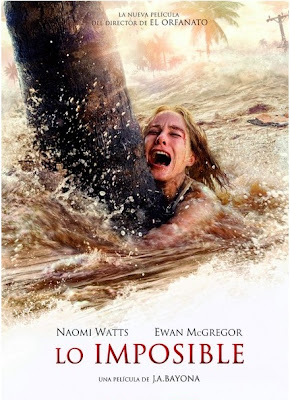 showings in Spain! It is interesting that Ewan McGregor and Naomi Watts already played together as a couple in brilliant drama STAY back in 2005. Most of the extras from the film are the actual survivors of the infamous Tsunami which devastated South East Asia and served as the basis for the film. It is also interesting that Ewan and Naomi met their real life counterparts - the family that survived the actual tsunami and on which this movie is based, earlier this year at Toronto film festival! The film is a huge Oscar contender!
Posted by DEZMOND at 12:00 AM