Now, here's an interesting project. If you like HOMELAND's star and Golden Globe winner Damian Lewis you might want to check this one out: he will star in British

film LORD OF MAGIC the story of which will give us a look at Britsh Lords and their attempts to conjure incarnate spirits and summon the dead. In this remarkable esoteric horror thriller, we will journey into the arcane world of 'real magic' when famous writers such as Arthur Conan Doyle, H.G. Wells and William Butler Yeats practiced magic in the occult as an art. As HOLLYWOOD SPY informed you the British redhead will also be seen next year as Lord Capulet in the new take on ROMEO AND JULIET, and will also star in US television mini series TO APPOMATTOX which will depict the emotional lives of America's Civil War generals, their wives and families - from West Point to Appomattox - against a backdrop of a war. Rob Lowe will play Ulysses S. Grant, Stephen Lang will be Abraham Lincoln, and the cast will also have D.B. Sweeney, Dwight Yoakam, Jason O'Mara, Johnathon Schaech, Noah Wyle, Neal McDonough, Bill Paxton in the $46 million series.

will  revolve around a young English seaman John Jewitt who is one of only two European survivors left after his crewmates clash with Mowachaht Indians on the west coast of North America. Torn between his desire for freedom and his love for an Indian maiden, Jewitt must choose one or the other.The lead role has been given to young hunk Kevin Zegers, while the cast also includes Ray Liotta and Native American actress Q'orianka Kilcher whom you remember from THE NEW WORLD and PRINCESS KAIULANI. Famous Native American star Wes Studi will also play in the film, and he was also seen in THE NEW WORLD, as well as in AVATAR, HELLL ON WHEELS and THE LAST OF THE MOHICANS


IRONCLAD BATTLE FOR BLOOD
You can also check out the first picture from the upcoming historical action IRONCLAD: BATTLE FOR BLOOD. The sequel to 2011 medieval adventure IRONCLAD which starred James Purefoy and Paul Giamatti, is 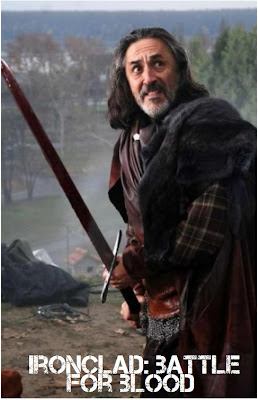 currently being shot in Serbia using Serbia's medieval fortresses as the sets. The story of the sequel, which should hit cinemas sometime next year, will revolve around a survivor of the Great Siege of Rochester Castle who fights to save his clan from from Celtic raiders. The first picture shows Serbian actor Predrag Bjelac (you remember him as Lord Donnon from CHRONICLES OF NARNIA: PRINCE CASPIAN, and as Igor Karkaroff from HARRY POTTER AND THE GOBLET OF FIRE) as Celtic leader Maddog who is seeking revenge against the English invaders who killed his son Ewan. Directed by Jonathan English, who also helmed the first film, the cast will also star delightful Tom Austen from MISFITS and THE BORGIAS.
Posted by DEZMOND at 12:00 AM