According to "The Hollywood Reporter" one of our favourite movie heartthrobs James Marsden is set to star next to Elizabeth Banks in WALK OF SHAME comedy. The story of the film centres on a high-strung

news anchor who, after a wild night out, finds herself locked out on the street with no phone, money, ID or car, and embarks on a series of misadventures as she finds her way to the most important job interview of her life. Don't forget that you will soon watch Marsden in THE BUTLER too. In the story about a butler who served American presidents for decades, Marsden will play president John F. Kennedy. There were also rumours this week that the producers want him to appear in the new sequel of X-MEN DAYS OF FUTURE PAST since they want to bring back all of the stars who played the superheroes in previous films including Hugh Jackman as Wolverine and Marsden as Cyclops alongside Ian McKellan and Patrick Stewart as Magneto and Professor X and Michael Fassbender and James McAvoy as their younger versions and Jennifer Lawrence and Nicholas Hoult in their roles from X MEN FIRST CLASS .

FLEET, a bestselling novel by Anne De Courcy. The story of the book is set in late 19th century India at the height of the British Raj and it centres around a young British woman who arrives in the country in search of romance and marriage. Two of our beloved Australian hunks Sullivan Stapleton (who is playing the lead role in 300 epic prequel) and Ryan Kwanten (from TRUE BLOOD) will take the lead roles in Australian thriller CUT SNAKE. As "Deadline" writes the film will be based on a true story which centres around two ex-cons who killed 15 people in 1973 when they torched the Whiskey Au Go Go nightclub in Brisbane. Stapleton will play a man who has just been released from prison and convinces his friend (Kwanten) to pull one last heist with him.


BARD, GOBLIN, LEGOLAS
And to finish this Saturday with a cherry on top of your cake, check out two new pictures from THE HOBBIT: AN UNEXPECTED JOURNEY which offer a look into characters we haven't seen so far in

photos: first there's Ian McKellen as Gandalf with the horrible Goblin king played by Barry Humphries (also known as Dame Edna comedian), while the second image offers the first look upon the 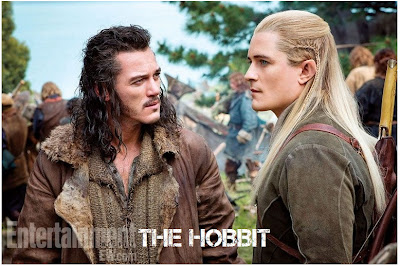 glorious Bard the Bowman played by amazing Luke Evans who will became a king and Orlando Bloom as Legolas the Elven archer! There's less that ten days before the premiere of the epic fantasy!
Posted by DEZMOND at 12:00 AM