According to "Entertainment Weekly", THE HOBBIT and ROBIN HOOD star Richard Armitage has been cast in tornado thriller CATEGORY SIX which centres on the worst tornado in American history, as captured by a group of local high school students through their cell phones and other devices. Richard Armitage is playing a widowed father, who enlists the help of storm chasers to find his missing son. The most irritating actress from THE WALKING DEAD Sarah Wayne Callies has also been cast in the film, which might be a good news, since the shooting of the film is parallel to the shooting of the AMC show meaning that her character horrid Lori might not survive the end of the third season :) 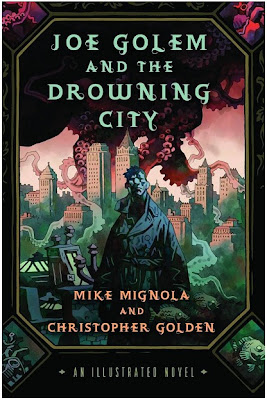 THE DROWNING CITY will be adapted into a film by Constantin film. The Mike Mignola and Christopher Golden novel to be adapted by Alex Proyas is set in 1970's Manhattan, where earthquakes and rising sea levels left the city under water fifty years earlier. It follows a fourteen year old girl, who is forced to go on the run after her magician friend, Felix Orlov, gets kidnapped by a group of strange men wearing gas masks and rubber suits. She escapes only to find herself in the company of Joe Golem, a mysterious man who does not remember his past.
Posted by DEZMOND at 12:00 AM