We're all girl, and some zombie, power today! As 'Deadline' reports Sony has, after a heated battle, acquired MARIAN script for an epic adventure movie with Margot Robie attached to star.
The story is based on the famous maid character from the Robin Hood folklore. After a conspiracy to conquer England in which the love of her life Robin Hood dies before her eyes, MARIAN picks up the cause to lead her people into a pivotal war. She comes to power, charging into a battle that will not only decide the fate of the kingdom but will see her don the mantle of the man she loved. In the process, she rises as a legend herself.


BBC'S 'SHIBDEN HALL' SERIES
ABOUT VICTORIAN LESBIANS
Here's a little bit of good old Victorian lesbianism for you today, my

spylings: BBC and HBO are set to produce new eight part period set TV series created by Sally Wainwright titled SHIBDEN HALL! Don't expect it any time soon, though, since it will shoot next year.
SHIBDEN HALL, set in West Yorkshire in 1832, tells the epic story of the remarkable landowner, Anne Lister. Returning after years of exotic travel and social climbing, Anne determines to transform the fate of her faded ancestral home, SHIBDEN HALL, in Halifax. To do this, she must re-open her coal mines and marry well. But the charismatic, single minded, swashbuckling Anne Lister,  who walked like a man, dressed head to foot in black, and charmed her way into high society,  has no intention of marrying a man. True to her own nature, she plans to marry a woman. 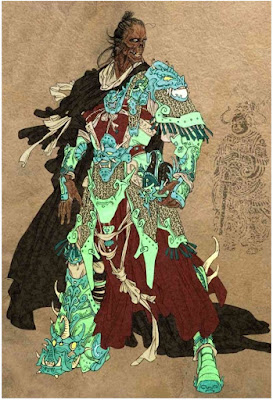 If Victorian lesbians and maids turned into vigilantes aren't novel enough for you, listen to this: Netflix will co produce eight episodes of South Korean period set zombie series KINGDOM! To air on Netflix in 190 countries next year, it  will be set in Korea’s medieval Joseon period where a crown prince is sent on a suicide mission to investigate a mysterious outbreak that leads him to a brutal truth that threatens the kingdom. The outbreak is a zombie one! Oh, my, martial arts meets the sorry stricken!
Posted by DEZMOND at 1:30 PM