'THE BABY BOSS'
ANIMATED DREAMWORKS TRAILER
Two trailers for you this Monday, starting with the first one for Dream Works' hilarious new animated movie THE BOSS BABY which will 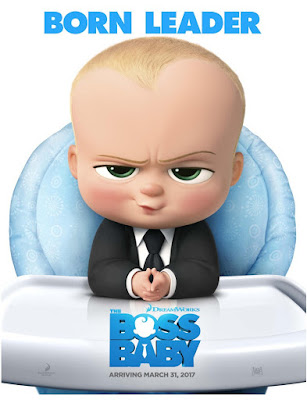 command its way into theatres next March!
Coming from the director of Madagascar it follows a most unusual baby. He wears a suit, speaks with the voice and wit of Alec Baldwin, and stars in a hilariously universal story about how a new baby's arrival impacts a family, told from the point of view of a delightfully unreliable narrator, a wildly imaginative 7 year old named Tim. With a sly, heart filled message about the importance of family, THE BOSS BABY is an authentic and broadly appealing original comedy for all ages. Laura Dern. BIG LITTLE LIES follows a trio of women who become close friends as the complicated and somewhat dangerous challenges of their personal lives converge. It is based on Liane Moriarty's novel.