LUKE EVANS IS 'PROFESSOR MARSTON' THE CREATOR OF WONDER WOMAN! EPIC '1898, THE LAST OF THE PHILIPPINES' 19TH CENTURY ADVENTURE TRAILER!

As 'Deadline' reports today, the filming has started on the biopic of PROFESSOR MARSTON, about the man who created Wonder Woman. Luke Evans plays the lead role!
PROFESSOR MARSTON is about Dr. William Moulton Marston, Harvard psychologist and inventor who created Wonder Woman in 1941, his wife, fellow psychologist Elizabeth (Rebecca Hall), and their poly amorous relationship with Olive Byrne (Bella Heathcote), a former student of Marston’s and an academic in her own right. Marston created famous Amazonian princess with significant input from both his wife and their lover. After he died from cancer in 1947, Elizabeth and Olive raised their children by Marston together and remained a couple. The film will explore how Marston dealt with the controversy surrounding his creation while he and his partners navigated and concealed a romantic and family life that, if exposed, could have destroyed them all.


1989 THE LAST OF  PHILIPPINES
EPIC TRAILER AND POSTER!
Meanwhile, the only trailer I have for you is a rather epic one for Spanish period set adventure 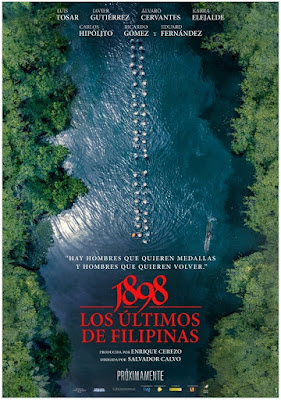 1898, LOS ULTIMOS DE FILIPINAS which is out in Spanish cinemas this December.  In the late nineteenth century in the Philippines, a Spanish squad was surrounded in the town of Baler by Filipino revolutionaries for about a year. In December 1898, with the signing of the Treaty of Paris between Spain and the US, the war was finally ended between the two countries and Spain ceded sovereignty over the Philippines to the United States. This film tells the story of the squad, known as "The Last of the Philippines". Luis Tosar, Javier Gutiérrez, Álvaro Cervantes lead the cast!