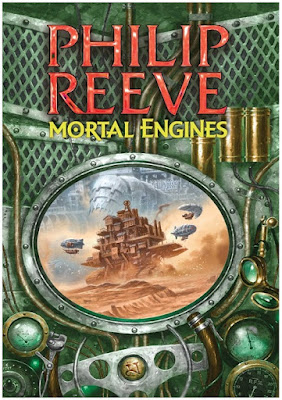 and Philippa Boyens, with whom he will produce the big screen adaptation of Philip Reeve's epic novels MORTAL ENGINES, bad news - they're writing the script as well and they might make it as deadly boring as them Hobbitses were! Peter's visual effects expert Christian Rivers will direct!
MORTAL ENGINES is set in a world many thousands of years in the future. Earth's cities now roam the globe on huge wheels, devouring each other in a struggle for ever diminishing resources. On one of these massive

Traction Cities, Tom Natsworthy has an unexpected encounter with a mysterious young woman from the Outlands who will change the course of his life forever.

There definitely is a resemblance: as news come from  Pathé production company, young Brit Jack O'Connell is set to take the lead role in their untitled biopic of scandalous fashion designer ALEXANDER MCQUEEN! Based on late designer's biography Blood Beneath the Skin by Andrew Wilson the movie will be directed by Andrew Haigh! Back in year 2009 McQueen organized one of his greatest shows which featured a reworking of his greatest designs from the past 15 years! It was dedicated to his mother whose death triggered his depression and suicide. The film explores McQueen’s creative process in the months leading up to the show providing an intimate portrait of the man behind the global brand – a moving celebration of a visionary genius whose designs transcended fashion to become art.
Posted by DEZMOND at 7:30 PM