1ST 'MEG'ALODON PIC WITH
JASON STATHAM & LI BINGBING
Now, we've seen all kinds of megamonsters wrecking chaos in movies, from dinos to godzillas and apes, and it is about time for prehistoric 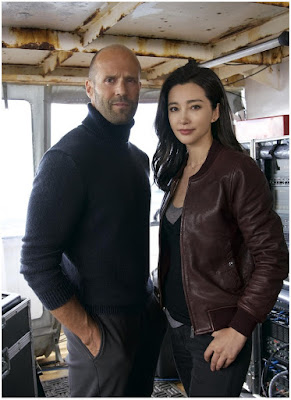 sharks to show their teeth too! Today you can check out the first photo of Jason Statham and Li Bingbing in MEG, sf action movie about prehistoric 20 meter long shark megalodon which was thought to be extinct long time ago! The two of them will play a part of deep sea submersible team of an international undersea observation program that gets attacked by this massive creature while trapped at the bottom of the deepest trench in the Pacific! This John Turteltaub directed movie should scare the cinemas March 2018!

Something entirely different: Monumental Pictures' biopic on Romantic poet Lord Byron's Victorian mathematician and computer science visionary daughter countess ADA LOVELACE! As 'Deadline' reports, Shawn Slovo is set to write a movie about  Ada, a gifted mathematician who foresaw the possibilities of first computer designs and wrote what is recognized as the first algorithm intended to be carried out by a machine, a true visionary of the modern computer. Her personal life was more complicated, dominated by her controlling mother who, after she divorced Byron soon after marrying him, denied her daughter any creative outlet in the hope that she would not take after him. As well as her lust for scientific innovation, Lovelace had a passion for parties and gambling and tragically died never seeing her ideas realized.