Earlier this weekend I showed you photos from HBO's new sf show WESTWORLD and now we have news that Ben Barnes is the latest addition to the show which is currently recasting some of the roles. Starring  Anthony Hopkins, Ed Harris, Evan Rachel Wood, James Marsden, and Thandie Newton. Coming from J.J. Abrams and Michael Chricton, and ready to hit the small screens sometime next year, the story of WESTWORLD will be set at a futuristic amusement park in which androids play people of the Wild West without knowing that they aren't real people! It is described as a dark odyssey about the dawn of artificial consciousness and the future of sin. Ben Barnes will be Logan, a self indulgent ladies man who is a return visitor to Westworld, the character is well versed in inhaling all the pleasures that it has to offer. Clifton Collins Jr will play Lawrence, a sly criminal who really knows his way around Westworld.


'INTO THE BADLANDS' TRAILER
FOR GENRE BENDING SERIES
Only a week or two ago I showed you the first photos from AMC's new fantasy series INTO THE BADLANDS which arrives this November, and today you can check 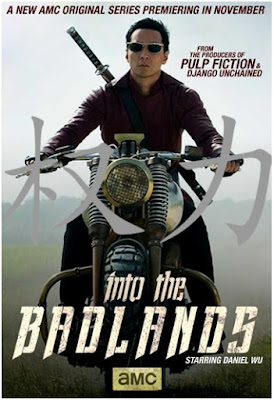 out the rather stunning first trailer!
The six episode series is set in a land controlled by feudal barons telling the story of a warrior named Sunny (Daniel Wu) and a young boy, M.K. (Aramis Knight), who embark on a journey across a dangerous land to find enlightenment. Marton Csokas will play Quinn, the most powerful baron in the Badlands, who spent his youth patrolling the Badlands and killing. Emily Beecham plays The Widow, a regal beauty and a cunning strategist with extravagant, high fashion taste while Sarah Bolger plays Jade, a porcelain beauty who masks her ambition with fragile innocence. Oliver Stark plays the warrior’s son Ryer who has not lived up to his father’s expectations.