A bunch of photo updates for you today coming from 'Entertain- ment Weekly'. We first start with the first photos from the second season of Starz' epic drama series OUT- LANDER showing both Jamie (Sam Heughan) and Claire (Caitriona Balfe) in their new French costumes (the yellow gown was created by costume designer Terry Dresbach, the wife of  Ronald D. Moore, the show's creator)  since the second season, which arrives only next year, will see them in France where they fled and are now trying to stop the Jacobite rebellion from ravaging 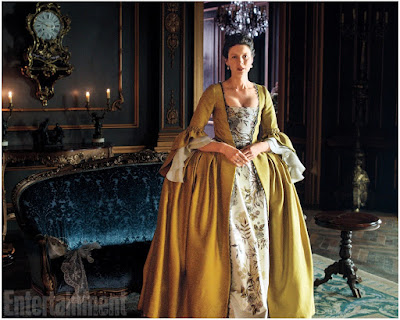 Scotland. As I reported before a number of stars has joined the new season with Stanley Weber playing Comte St Germain the main rival of Jamie's cousin who is the leading wine seller in France. VICIOUS star Frances de la Tour will play Mother Hildegarde, woman who comes 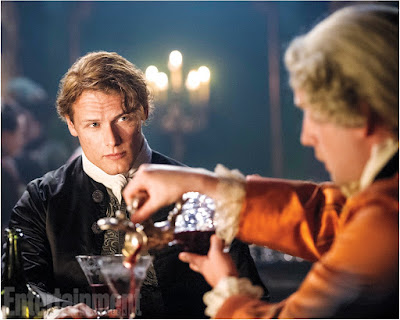 from an aristocratic and well-connected family. When Claire begins volunteering at L'Hopital des Anges, she encounters and soon earns the respect of Mother Hildegarde. Andrew Gower will be Prince Charles Stuart who wants the throne, while Margaux Chatelier will play an old flame of Jamie's. 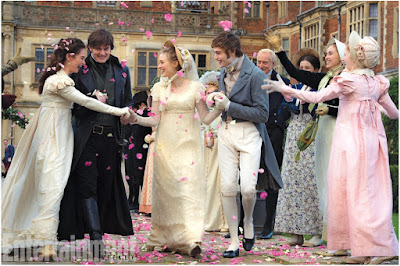 lemonade into something more apocalyptic. Lily James will portray Lizzy, who has become romantically entangled with Mr. Darcy (Sam 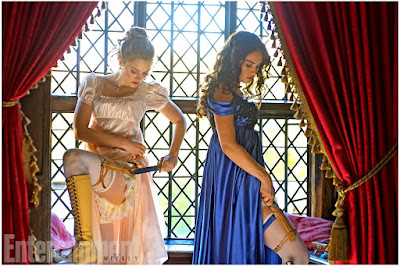 Riley). Sadly, their love will be challenged by zombie virus in which the 'sorry stricken' (aka zombies) are rising from the grave to cause Victorian zombie mess. The victims of this mysterious plague have been 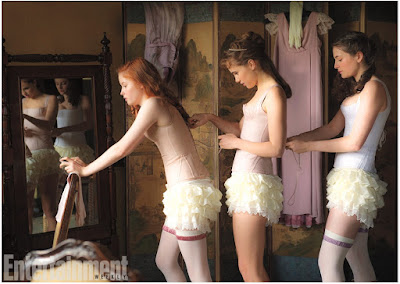 roaming around for the past 70 years, and it's up to Lizzy, her sisters, and her lover to stop the madness! Douglas Booth, Matt Smith and Jack Huston also star.


'VICTOR FRANKENSTEIN'
NEW PHOTO WITH JAMES MCAVOY AND DANIEL RADCLIFFE
And there's also a new photo from long delayed Victorian horror adventure VICTOR FRANKENSTEIN in which Daniel Radcliffe plays Igor and the film is told from his  perspective, showing the 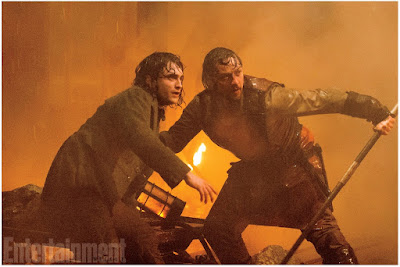 troubled young assistant's dark origins, his redemptive friendship with the young medical student Viktor Von Frankenstein (James McAvoy), and him becoming eyewitness to the emergence of how Frankenstein became the man - and the legend - we know today.
Posted by DEZMOND at 1:30 PM