NEW SF PROJECTS
ROLAND EMMERICH'S 'MOONFALL'
A bunch of sf projects have been announced: Roland Emmerich is planning to make sf epic MOONFALL for Universal, following an unlikely band of misfits who must unite to save

humanity when the moon falls out of orbit and hurtles towards earth.


AMY ADAM'S 'ARRIVAL'
Meanwhile, Amy Adams' sf movie ARRIVAL has got a November release date! It takes place after alien crafts land around the world. An expert linguist is recruited by the military to determine whether they come in peace or are a threat. As she learns to communicate with the aliens, she begins experiencing vivid flashbacks that become the key to unlocking the greater mystery about the true purpose of their visit. Jeremy Renner and Forest Whitaker also star.


'SEVEN- EVES' GETS ADAPTED
And Ron Howard and Brian Grazer are going to adapt Neal Stephenson's SEVENEVES which centres on a catastrophic event that renders Earth a ticking time bomb, and nations band together to devise a plan to ensure the survival of humanity in outer space. Five thousand years later, their progeny, seven races now 3 billion strong, embark on another audacious journey to an alien world utterly transformed by cataclysm and time: Earth. 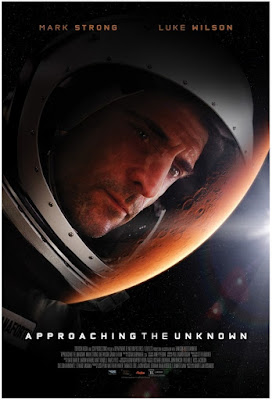 And, of course, a sf trailer for you as well today: Mark Strong's sf thriller APPROACHING THE UNKNOWN which is currently out in cinemas. Also starring Luke Wilson, it  follows astronaut William D. Stanaforth, sent on a one way solo mission as part of humanity’s first steps toward colonizing Mars. Watched by the entire world, he is completely alone, and when the trip takes a toll on the ship’s life support systems, he is forced to make impossible choices that threaten his sanity, mission and very existence!
Posted by DEZMOND at 7:49 PM