As 'Deadline' reports, inspired by Jean Teulé’s novel, Le Montespan, which has been adapted by Aja, it covers the doomed and passionate relationship between the Marquis Louis Henri de Montespan and his wife Athénaïs, who became the mistress of Louis XIV, aka the Sun King. Although having one’s wife spend time in bed with the monarch was perceived as a source of prestige for aristocrats at the time, the Marquis vowed to get his wife back at all costs. They've spent nearly 30 years trying to free themselves from the muck of this hypocritical society they lived in!
FILTHY ERA
Aja will also depict the filth and stench people lived in at that time with the doctors advising to never wash, with women peeing and defecating under their beautiful dresses, and with their strange dental ‘hygiene’ which included filling their cavities with butter and honey that would ooze out every now and then during casual conversation! 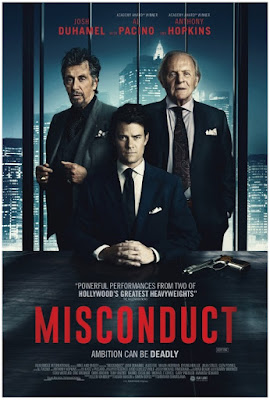 Meanwhile, you can also check out a trailer and new poster for action thriller MISCONDUCT starring a stellar trio Josh Duhamel, Anthony Hopkins and Al Pacino, with Malin Akerman and Alice Eve leading the female cast and Byung Hun Lee the international one.  When an ambitious young lawyer takes on a big case against a powerful and ruthless executive of a large pharmaceutical company, he soon finds himself involved in a case of blackmail and corruption. The movie is playing this weekend in British cinemas.
Posted by DEZMOND at 7:38 PM