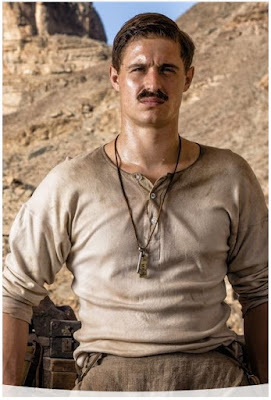 We're having a new epic series weekend here at the spy, people, starting with the delicious first photos and a preview clip from ITV's epic adventure new series TUTANKHAMUN with Sam Neill and Max Irons to air sometime later this year. The four-part event mini series, directed by our dear Peter Webber (Girl With the Pearl Earring),  is written by leading screenwriter Guy Burt (Jekyll and Hyde, The Borgias) and will focus on the legendary personal story of Howard Carter, a solitary man on the edge of society who became an 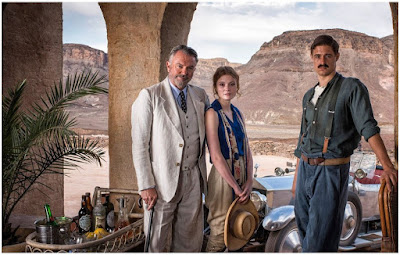 
DIGGING UP THE PHARAOH!
Set against the great sweep of ochre sands, looming cliffs and baking heat of Egypt’s Valley of the Kings, the story unfolds from 1905 when Carter (Max Irons), an eminent British archaeologist who we meet in 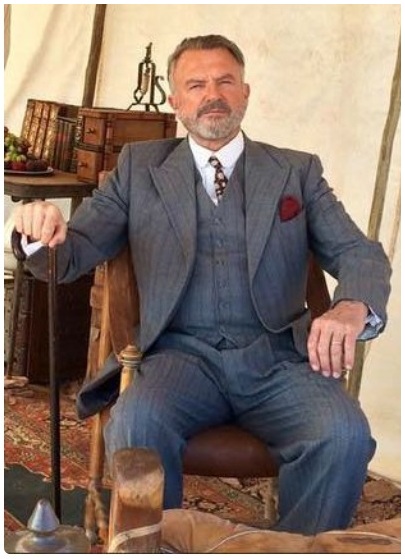 his early 20’s, is fervently leading an expedition. Amidst the chaos scattered across the Valley floor, Carter’s grim determination to find lost antiquities is only too apparent. He has an easy manner with the Egyptian men who work alongside him, but when tempers fray Carter 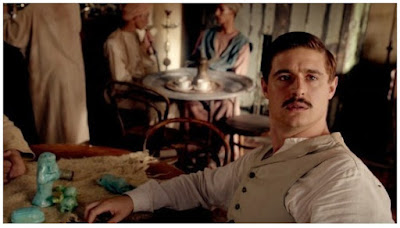 is hotheaded and puts the dig and his career in jeopardy. The disgraced Carter's career takes an upswing when he's hired by an eccentric aristocrat Lord Carnarvon (Sam Neill) to search for the famous tomb of pharaoh TUTANKHAMUN in the 1920s.

Nothing wrong with Sam Neill in a series I say!

Hope we get airing time soon!

I'm a sucker for Egyptian archaeology - this looks great.

hope it crosses the pond so that you can watch it too, Bobson

glad to hear it, Ray!

I haven't seen many movies/series about archaeology- but this does sound interesting. Thanks for sharing!
~Jess

Is Max Irons the son or grandson even perhaps of Jeremy Irons?

Be welcome, hope you will enjoy it!

the talentless son :) Didn't you hear of Jeremy's scandal a year or two ago, something of fathers, sons, homosexuality and sex...

Sounds like a good one! Tut's tomb came to the Chicago museum some years back and I was so disappointed to have missed it. I've been hoping that it would make a return, but no such luck.

that would really be a big miss!

So many series, have to pick and choose what to watch.

I spread them nicely around the year :)

Once the ear gets used to Sam Neill’s cut-glass take of Lord Carnarvon’s toff’s accent and Carter's lack of his Norfolk accent there’s a decent enough back story winkling out in this short clip, cleverly weaving in Carnarvon’s attendance at Cambridge University ( albeit a brief stay where he was a monumental failure ( with the shadow of disgrace) and incidentally boarded himself out of halls), then we get the story line covering The Earl’s gammy leg caused by a car accident, and his previous laborious digs at Thebes with no more than a mummified cat to show for the financial outlay by his wife Almina, except Almina is not mentioned. The casting board suggests she is not a character we shall see. Pity, that. Discovery of the dead cat fixes the date as 1905-6. Official dates for the Carnarvon-Carter meet centre on 1908-9. Carnarvon offered Carter a vast sum of money in 1909 to work with him at Thebes. But this is celluloid as opposed to the historical truth – so one must allow for an element or two of horrible history.

There is then alas further pure fiction on how the men actually did meet, but I adored the long, long pause for eyes meeting as in a classic love story. This meet in a street cafe is neatly contrived to cover how Carter and Carnarvon first went public, with a moralistic pre- cursor showing that Carter was not willing to trade in stolen goods. Oh really, come off it? In the real Tutankhamun time line the two men knew each other long before the passing of names by ‘ that bugger’ [Gaston] Maspero – Carter’s beloved father figure - but the slick dialogue of Maspero recommending Carter to his Lordship is done well. Trouble is it was Ernest Wallis Budge of the British Museum that was the real go between.

That said, these two famed discoverers of Old King Tut were in fact trading in antiquities for a long previous period - Carter as dealer / tomb robber and Carnarvon as customer in Cairo and long before their collision course in Luxor between 1905 and 1909.

Carnarvon’s motor car driving is pure Toad of Toad Hall. That imagery of the Earl battling the sand dunes in a swanky car, a sumptuous location and breath taking cinema photography as well as the up market writing promises to capture viewers' attention , with a script as palatable as the Fellowes chap of Downton Abbey fame. Americans will love and lap it all up as true.

I do hope once finally on our screens this expansive 4 part interpretation by Messrs Peter Webber, director and Guy Burt, scriptwriter and a cast of thousands boys, men and donkeys follows at least more of the important aspects of the actual time line and better than other past filmy versions and reflects historical accuracy with more than just lip service else for else to me it will end up in the sand dunes as just another glossy and ultimately phoney account of the story Carter and Carnarvon’s conquests. That would be a pity and a missed chance, especially with the centenary of the discovery looming in 2022.

It is a good moment to take risks and show what it really was that made these two men gel and become successful tomb robbers. The age of the two actors worried me when I saw the casting but it probably will work fine as the public are already brainwashed to expect an old man –young man scenario between the two main figures but it sticks out like the Sphinx of Giza that there is over 30 years in age difference between Neill and Irons.. Carter was aged 35 in 1909 ( the official date from learned biographers for the two men first joining forces at Thebes) Carnarvon was then aged 43, so in reality there was only eight years between them. All that said, the clip has whet my thirst for more.