Now I do like when Hollywood throws a film cast which makes me all tingly inside :) Two nom nom stars Morena Baccarin and Joseph Fiennes will play in a new thriller THE UNHOLY! According to "THR" the story is based on actual scientific research that suggests evil lurks within our own DNA, and follows a group of scientists recruited by the Vatican for a worldwide initiative to find new candidates for exorcisms (if you ask me, the Prada clad Pope should be first in the line). They are forced to re-examine their beliefs when faith meets science in a whole new way. And since we love us good movie songs, here's a nice piece of info: Mariah Carey will release her ALMOST HOME feel-good single next week, which will be a part of OZ GREAT AND POWERFUL soundtrack. The fantasy adventure with Mila Kunis, Michelle Williams, Rachel Weisz and James Franco hits cinemas March 8th!


NEED FOR SPEED
If you are fan of FAST & FURIOUS, and you saw the trailer a few days ago, another fast cars film you might like is NEED FOR SPEED. The

film already has delightful Aaron Paul, Imogen Poots and Dominic Cooper, but now the new name in the cast is good old Michael Keaton. The story of the film revolves around a street-racer (Aaron Paul), who teams up with a rich and egotistical business partner (Dominic Cooper) that sets him to take a fall for a crime. After being released he joins a cross country race to exact his revenge. He ex-partner finds out about his scheme and places a bounty on his head, sending him through a gauntlet of bounty hunters. According to "THR" Michael Keaton will be portraying the reclusive and eccentric overlord of the race, who recruits the best drivers in the world to partake in his event.

JUPITER RISING
One of our most anticipated of the upcoming science fiction epics, JUPITER RISING, from the Wachowski siblings, has just added Sean Bean to the cast which already has three sinfully sexy creatures - Mila Kunis (who has tones of projects this year), Channing Tatum (who also has loads of projects this year) and Eddie Redmayne (who scored big with his outstanding performance in LES MISERABLES and is now one of the most quickly rising stars in Hollywood). Sean Bean will portray a Han Solo type of character in the film set in a universe where humans are at the bottom of the evolutionary food chain, and one supreme leader rules all. The story will centre on a young Earth woman (Mila Kunis) who is targeted for assassination by the Queen of the Universe, because she bears a striking similarity to the ruler. Channing Tatum plays the bounty hunter who is sent to kill the 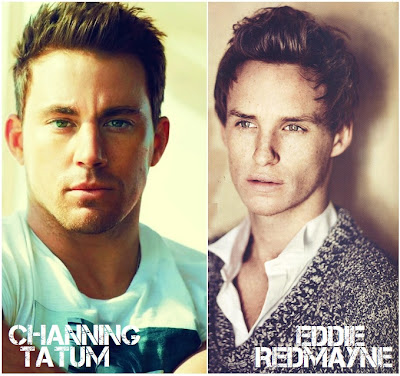 woman, but ends up falling for her in the process. Well, as long as Bean isn't playing the intergalactic queen, I'm fine with this...
Posted by DEZMOND at 12:00 AM