WHICH STARS WILL WE SEE IN HALLMARK'S COUNTDOWN TO CHRISTMAS 2022? ALL YOU NEED TO KNOW ABOUT LA BREA ADVENTURE TV SERIES SEASON 2 STARTING NEXT WEEK

HALLMARK CHANNEL'S
COUNTDOWN TO CHRISTMAS
Believe it or not, it is that time of the year when Hallmark announces it's legendary countdown to Christmas which means festive movies from October 21st all the way till the end of December. The 40 movies that will premiere across the channel will bring back some of your favourite romantic genre stars from Luke MacFarlane and Corey Sevier to John Brotherton, Dean Jeannotte and Andrew Walker! The lineup will also include a gay romance between Jonathan Bennett and George Krissa in THE HOLIDAY SITTER about a guy who recruits the help from a handsome neighbour while babysitting his niece and nephew! Some of the films will also feature Aimee Teegarden, Tia Carrere, Jack Wagner, Victor Webster, Will Kemp, Melissa Peterman, Greta Scacchi, Bruce Campbell. There will even be THREE WISE MEN AND A BABY, a movie including three Hallmark faves Paul Campbell, Tyler Hynes, Andrew Walker.
LA BREA SEASON 2
ARRIVES NEXT WEEK!
One of the premieres that next week is bringing us is the return of NBC's adventure series LA BREA with the second season after the success of the first one last year which became the best watched new show of the season.The series follows an epic family adventure after a massive sinkhole opens in Los Angeles pulling people and buildings into a mysterious and dangerous primeval land where they have no choice but to band together to survive.
STARTING SEPTEMBER 27TH
which is next Tuesday, season two returns to the Harris family which remains separated as Eve (Natalie Zea) is reeling from her bratty son, Josh (Jack Martin), having mistakenly gone through a portal to 1988. What she doesn’t 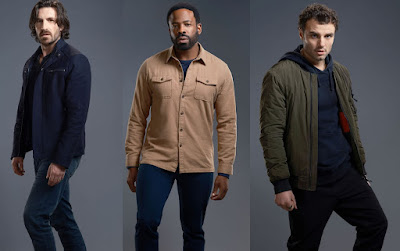 know yet is that her estranged husband, Gavin (Eoin Macken), and their daughter, Izzy (Zyra Gorecki), have landed in prehistoric Seattle and now must brave the elements and animals to make their way to L.A. The cast will 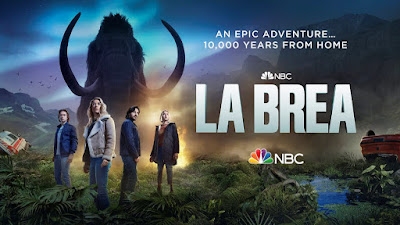 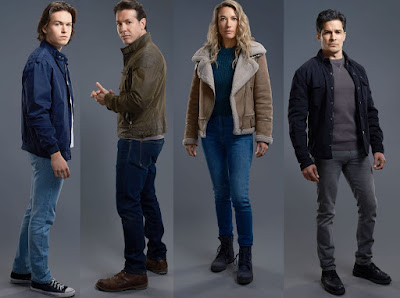 the leader of The Exiles, a dangerous group of people living in 10,000 BC. Taamet will become a feared adversary of the La Brea Survivors as Season Two unfolds.
Posted by DEZMOND at 7:30 PM