INTERVIEW WITH THE VAMPIRE
WHO WANTS TO LIVE FOREVER?
I know, I know, I am not into bloodsuckers either, but I certainly am a huge sucker for our dearest Sam Reid, the best actor of his generation, so watching AMC's new INTERVIEW WITH THE VAMPIRE mini TV series is a definite must when it launches October 2nd! The new eight episode adaptation of the famous novel by Anne Rice will have Rolin Jones as writer, executive producer, and show runner, with Anne's son Christopher Rice also serving as the executive producer.
INTERVIEW WITH THE VAMPIRE
a sensuous, contemporary reinvention of Anne Rice’s revolutionary gothic novel,  follows Louis de Pointe du Lac (Jacob Anderson), Lestat de Lioncourt (Sam Reid) and Claudia’s (Bailey Bass) epic story of love, blood, and the perils of immortality, as told to journalist Daniel Molloy (Eric Bogosian). Chafing at the limitations of life as a Black man in 1900s New Orleans, Louis finds it impossible to resist the rakish Lestat de Lioncourt’s offer of the ultimate escape: joining him as his vampire companion. But Louis’s intoxicating new

powers come with a violent price, and the introduction of Lestat’s newest fledgling, the child vampire Claudia, soon sets them on a decades-long path of 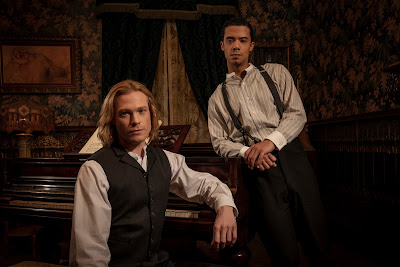 revenge and atonement. “Let the tale seduce you, just as I was seduced,” Jacob Anderson as the vampire Louis de Pointe du Lac says in the trailer 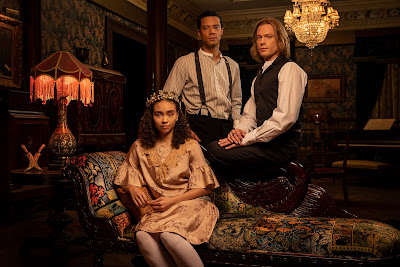 below. “He was my murderer, my mentor, my lover, and my maker.' Check out the trailer under the post and tell us what you think, will you be watching?
Posted by DEZMOND at 5:30 PM