Forgive me for shedding a tear, but it seems our dearly beloved Welsh hunk Luke Evans will again play a negative character! He's just scored a lead role in Noel Clarke's 10x10, a thriller in which he will be Lewis, a seemingly ordinary guy who under the surface hides a singular obsession – revenge – and the focus of his obsession is Cathy (Kelly Reilly). In broad daylight, he kidnaps her and takes her to his home, where he’s built a soundproofed cell measuring 10 feet by 10 feet and where he plans to extract a dark secret from her past. But as his motive begins to unravel, it becomes clear that Cathy is a formidable match for her kidnapper.
You will next see Luke playing Gaston in Disney's live action Beauty and the Beast, while Reilly leads Sky's new epic TV series Britannia set in Roman times.

BECOME A VIGILANTE
After just giving birth to her second child two weeks ago with her husband Jason Sudeikis, lovely Olivia Wilde will jump into action. She will lead A VIGILANTE a movie directed and written by Sarah Daggar Nickson playing The Woman, a secretive figure who rids victims of their domestic abusers! Next year Wilde will also join Logan Marshall Green, Whoopi Goldberg, Chloe Sevigny and James Franco in BLACK DOG, RED DOG, a movie about the life of poet Stephen Dobyns as he deals with his relationships with women and with mortality, from his childhood to his time as a young journalist and then his transition to poetry. 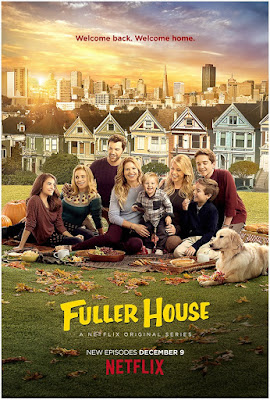 Netflix has released the first trailer for the second season of their popular FULLER HOUSE sitcom which will be focused on different holidays celebrated  among the members of the Tanner, Fuller and Gibler families, such as Thanksgiving, Christmas, and New Year’s Eve. Returning to the small screens for the second year, the family experiences a new year of life’s moments — the start of a new school year, budding romances and coming together for the holidays. Candace Cameron Bure, Jodie Sweetin, Juan Pablo Di Pace, Michael Campion, Elias Harger, Scott Weinger and John Brotherton all return to their roles from December 9.