Disney's big screen adaptation of Madeleine L'engle's A WRINKLE IN TIME has added Reese Witherspoon! She will play Mrs Whatsit in the story of a girl who, with her brother and a friend, goes on an unexpected journey into alternate dimensions on a mission to bring home their father. Chris Pine plays the father, Gugu Mbatha Raw is her mother with Oprah Winfrey also in the cast.
'I, REBEL' SF SERIES
In TV news, David Goyer is to produce new sf series I, REBEL, about an astronaut, lost in space for eight years, who crash lands on Earth to find the world colonized and enslaved by a humanoid alien race. His rise from slave to rebel leader will spark a revolution. 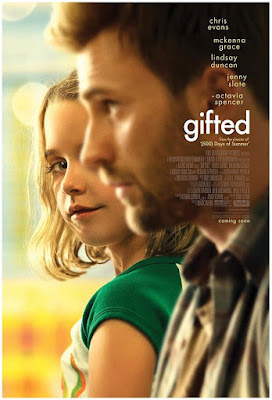 A new trailer has been revealed for touching drama movie GIFTED with our dearly beloved Chris Evans! Out next April, exactly on your spy's birthday, it follows Frank Adler (Chris Evans), a single man raising a child prodigy, his spirited young niece Mary,  in a coastal town in Florida. Frank's plans for a normal school life for Mary are foiled when the seven year old's mathematical abilities come to the attention of Frank's formidable mother Evelyn (Lindsay Duncan) whose plans for her granddaughter threaten to separate Frank and Mary! Octavia Spencer also stars!