EMMA STONE TO STAR IN

'LOVE MAY FAIL' ADAPTATION
Today we're busy with the news on all the new gigs that await hot redhead Emma Stone! She will star in LOVE MAY FAIL, an adaptation of Matthew Quick's bestseller about a divorcee who returns to her home town and tries to clear the name of her favourite English teacher whose career ended forcibly after a classroom scandal.
AND 'BATTLE OF SEXES'
She will also play tennis legend Billie Jean King in BATTLE OF THE SEXES which focuses on the 1973 tennis 5 set match between King and Bobby Riggs (Steve Carell). The competition took place in Texas and had a winning prize of $100,000. King ended up beating the former Wimbledon champion Riggs in a victory for female players! I've reported earlier that she will also join Rachel Weisz in royal drama THE FAVOURITE on Queen Anne of England.


'BLOODY LOVELY' POSTER
FOR 'PRIDE AND PREJUDICE AND ZOMBIES' IS HERE! 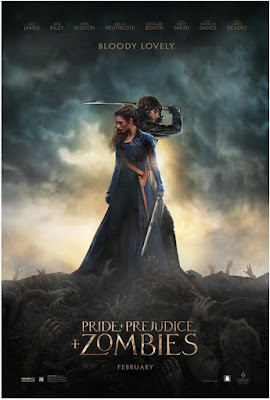 Continuing this week's streak of epic posters, here's a ''bloody lovely'' new one for PRIDE AND PREJUDICE AND ZOMBIES which is out next February with 'the sorry stricken' infesting the land of Jane Austen's classic 19th century England tale. Elizabeth Bennet (Lily James) is a master of martial arts and weaponry and the handsome Mr. Darcy (Sam Riley) is a fierce zombie killer, yet the epitome of upper class prejudice. As the zombie outbreak intensifies, they must swallow their pride and join forces! Douglas Booth and Jack Huston also star.
Posted by DEZMOND at 1:20 PM