Just two epic TV updates for you today, people, beginning with the first poster for FX's upcoming new historical series THE BASTARD EXECUTIONER which is bringing medieval weaponry to the small screens from September 15th! FX has also released a number of promo teasers for the new show and I'm showing you two of them below.
Coming from Kurt Sutter (SONS OF ANARCHY), the ten episode historical action series THE BASTARD EXECUTIONER tells the story of a warrior knight (Lee Jones) in King Edward The Thirds charge who is broken by the ravages of war and vows to lay down his sword. But when that violence finds him again, he is forced to pick up the bloodiest sword of all: an executioner's sword. Part of the plot will deal with fallout from the Madog ap Llywelyn Welsh rebellion! Stephen Moyer, Matthew Rhys and Ed Sheeran are also in the cast! 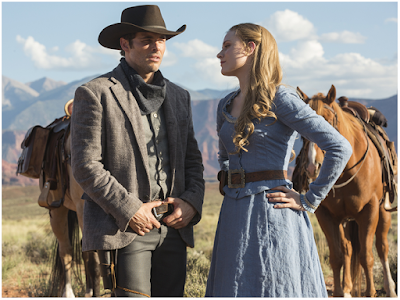 The story is set in a futuristic amusement park in which androids play people of the Wild West without knowing that they aren't real people! It is described as a dark odyssey about the dawn of artificial consciousness and the future of sin!
Posted by DEZMOND at 1:20 PM