Here's a new science fiction movie for us and coming with a rather hunky cast indeed: as 'Deadline' reports Kellan Lutz, Daniel MacPherson and Rachell Griffiths will lead Australian sf action movie SFv1! The movie, which has already started shooting, is set in the far future in an era of interplanetary colonization, with the story following a drifter who teams up with a military contractor to rescue the contractor’s daughter. Amid an impending global crisis caused by the contractor’s company, the trio must escape to safety! Bren Foster and Temuera Morrison are also starring.
As  I reported over the last year, we will be watching Australian hunk Daniel MacPherson as Elven prince Arion next year in SHANNARA epic series at MTV, while Kellan Lutz is to star in EXTRACTION action flick next year in which he will be the son of Bruce Willis who tries to save his father from terrorists. 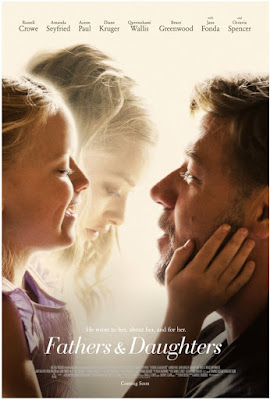 When the past won't let you go, let love see you through... that is the main motto of deeply touching drama FATHERS AND DAUGHTERS with Russell Crowe, Amanda Seyfried, Aaron Paul, Jane Fonda and Diane Kruger. Today you can check out the first trailer for the film in which Crowe plays a Pulitzer-winning writer who grapples with being a widower and father after a mental breakdown, while, 27 years later, his grown daughter struggles to forge connections of her own. The movie should arrive to theatres some time this Autumn or early winter.
Posted by DEZMOND at 2:00 PM