Now here's an interesting sf movie: Glenn Close has joined Willem Dafoe and Noomi Rapace in WHAT HAPPENED TO MONDAY set in a future where overpopulation and famine have forced governments to undertake a drastic One Child Policy and where seven identical sisters live a hide and seek existence pursued by the Child Allocation Bureau. The Bureau, directed by the fierce Nicolette Cayman, enforces a strict family planning agenda that the sisters outwit by taking turns assuming the identity of one person: Karen Settman. Taught by their grandfather who raised and named them — Monday, Tuesday, Wednesday, Thursday, Friday, Saturday and Sunday — each can go outside once a week as their common identity, but are only free to be themselves in the prison of their own apartment. That is until, one day, Monday does not come home. 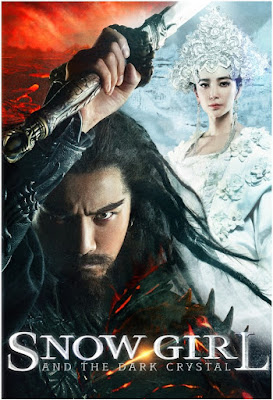 adventure SNOWGIRL AND THE DARK CRYSTAL and now you can check out an eye popping new trailer!  The movie which broke records in China and is out August 4th on Blu Ray and DVD and on demand in USA,  stars gorgeous Li Bingbing as a snow demon opposite Kun Chen’s Zhong Kui, a ghost who maintains order in the afterlife. He is legendary Chinese anti-hero, a young man endowed with mysterious powers who is forced into a battle among the realms of Heaven, Earth and Hell in the course of his attempt to save his countrymen and the woman he loves.
Posted by DEZMOND at 1:30 PM