HUGH JACKMAN TO PLAY THE LEGENDARY ADVENTURER IN 'THE ODYSSEY? STUNNING 'EMPIRE' 'STAR WARS THE FORCE AWAKENS' COVERS WITH HEROES AND VILLAINS! DANTE'S INFERNO GETTING A MOVIE

HUGH JACKMAN TO
GO ON AN 'ODYSSEY'!

Now colour me super ubber hyper interested: Hugh Jackman in skirt and sandals in Homer's ODYSSEY! Australian hunk is negotiating around the lead role in Lionsgate's epic adventure based on the famous epic poem. I've already announced earlier this year that HUNGER GAMES' Francis Lawrence is directing and that it is a potential franchise. As you know the ancient story follows the adventures of the famous Ithacan hero who's voyage home from the Trojan war last almost a decade thanks to all kinds of mythical difficulties while his wife Penelope and son Telemachus are trying to save his throne.
DANTE'S INFERNO MOVIE
Speaking of old epics, it was also announced yesterday that Dante's Inferno will be getting its own movie too in which Dante himself will travel through the nine levels of hell to save the woman he loves.


NEW 'EMPIRE' COVERS SHOW
'STAR WARS' THE FORCE AWAKENS' HEROES AND VILLAINS
Your visual treat for today are brand new EMPIRE covers with STAR WARS: THE FORCE AWAKENS covers. One cover is for the heroes: 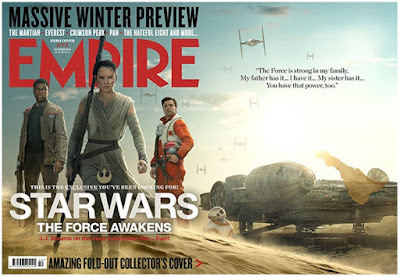 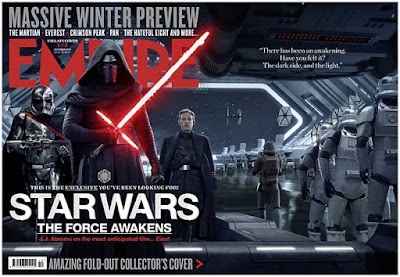 the other cover shows  the baddies Gwendoline Christie as Captain Phasma, Adam Driver as Kylo Ren and Domhnall Gleeson as General Hux all members of The New Order!
Posted by DEZMOND at 1:30 PM