POPPY DRAYTON TO LEAD THE CAST AS AN ELVEN PRINCESS
Another of the huge epic shows that we await in the future has got its lead star: according to 'Deadline' Poppy Drayton will lead the cast in MTV's ten episode epic fantasy series SHANNARA based on Terry Brooks' beloved novels! The story is set in our world, thousands of years after the destruction of our civilization, centring on the SHANNARA family, whose descendants are empowered with ancient magic and whose adventures continuously reshape the future of the world. Poppy Drayton will play Elven princess Amberle. Agile, fit and capable, she has become the first female to be accepted as one of the Chosen, the special group of Elves responsible for the protection and care of the ancient Ellcrys tree. But unlike the rest of the Chosen, Amberle’s dangerous and heroic journey is just beginning.


'THE QUEEN' HISTORICAL SERIES
CLAIRE FOY TO WEAR THE

BRITISH CROWN?
Yesterday I showed you the first poster for MARCO POLO, and now another Netflix series is progressing on: they have officially ordered THE QUEEN historical series for a ten episode season. The bad news, at least for me, is that Claire Foy (I've found her irritating in UPSTAIRS DOWNSTAIRS and in CROSSBONES) has been rumoured for the lead role! To air in 2016 this extremely expensive $100 million worth series would follow the life of British monarch queen Elizabeth II from her youth to her later years describing her political life and her relationships with all the prime ministers. Claire Foy might play her in the first season which would follow a 25-year-old Elizabeth taking over the throne and forging a relationship with Winston Churchill. Each of the following seasons would explore a different decade in her reign with all the intrigues, love lives and machinations behind the great events that shaped the second half of the 20th century! Older actresses will take the lead in other seasons.


'SONG ONE' TRAILER
ANNE HATHAWAY GOES ROMANTIC
With all the epic news we had yesterday, I didn't get to show you the first trailer for Anne Hathaway's new romantic drama SONG ONE which arrives 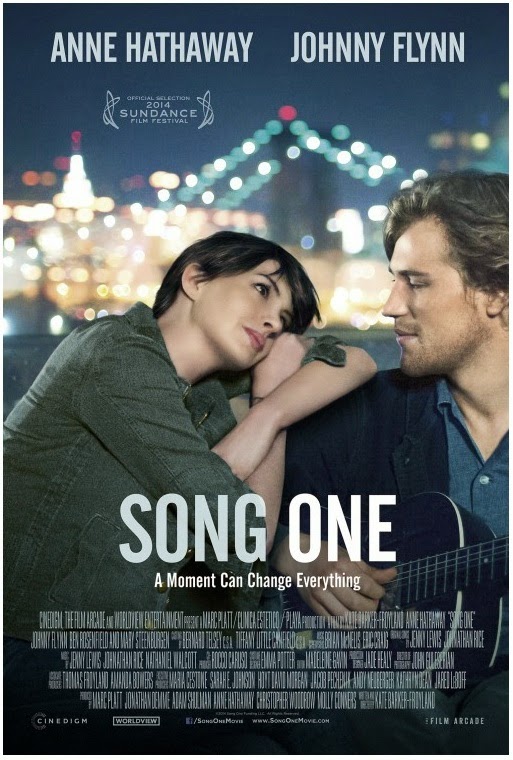 next January! She plays Franny, whose musician brother Henry (Ben Rosenfield) is injured and hospitalized in a coma following a car accident. Franny returns home after a long estrangement and begins to use his notebook as a guide to how his life has evolved in her absence. Franny seeks out the musicians and artists Henry loved, in the course of her journey meeting James Forester (Johnny Flynn), his musical idol, whose success and fame belie a shy and private man. As a strong romantic connection develops between Franny and James, the question becomes if love can bloom even under the most adverse circumstances.
Posted by DEZMOND at 2:30 PM